UFC's Light Weight champion Khabib Nurmagomedov took the Instagram to pay tribute to his deceased father & coach Abdulmanap after around 20 days of the famous Russian coach's sad demise. He took Instagram on 23rd July 2020, 19 days after the Dagestani coach's death caused due to Corona Virus pandemic on July 3, 2020, in a hospital in Moscow, Russia.

The current UFC Light-weight champion Khabib Nurmagomedov recited a phrase from Quran Quran 17:23-24 with a beautiful picture of his father, and his post reads:

And your Lord has decreed that you not worship except Him, and to parents, good treatment. Whether one or both of them reach old age [while] with you, say not to them [so much as], "uff," and do not repel them but speak to them a noble word. And lower to them the wing of humility out of mercy and say, "My Lord, have mercy upon them as they brought me up [when I was] small." 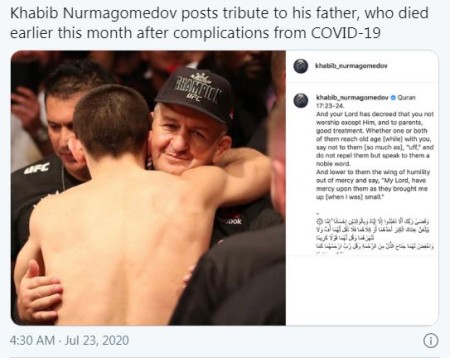 Khabib's father had also undergone heart surgery before COVID complications which led 57-year-old Abdul's death after he was put in a medically induced coma.

Abdulmanap was Khabib's trainer throughout his career. Likewise, he also was Islam Makhachev's trainer. Currently, Khabib is ranked No. 2 in the UFC pound-for-pound frankings behind Jon Jones.

The 31-year-old has a career record of 28 wins and 0 losses, including a stunning UFC 229 victory over Conor McGregor back in 2018.

According to his manager Ali Abdelaziz, Khabib will fight the current interim lightweight champion Justin Gaethje for a unified championship at some stage in 2020. As Gaethje and Khabib are both managed by Ali, his decision to overcome his loss and compete against Justin who defeated Tony Furgeson has been praised by all fight lovers.