Khabib Nurmagomedov Vs Tony Ferguson" That fight is the best ever.” Chael Sonnen picks Tony 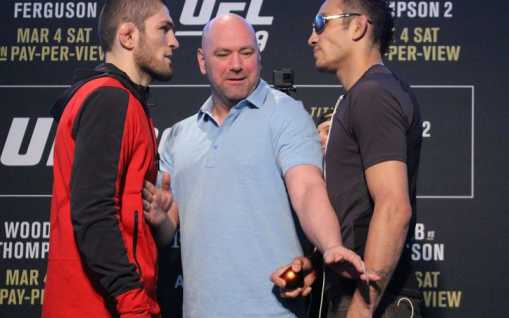 Coming to 28-0 in MMA, Khabib Nurmagomedov has a 12-0 undefeated record in the UFC and has defeated several lightweight heavyweights like former Lightweight champions Conor McGregor and Rafael dos Anjos, former interim champion Dustin Poirier, etc while claiming the 155-pound title. However, fans believe he still has a task to complete to prove himself the Lightweight Greatest- i.e. beat Tony Ferguson.

El Cucuy 25-3 in MMA and is on 12 fight win streak like the Eagle. He also has wins over notable lightweights and is regarded as one of the best in the division. Having canceled the bout between these two fighters- 4 times earlier, they are scheduled to fight on April 18, 2020, at UFC 249 and former UFC fighter and ESPN analyst Chael Sonnen believes the fighter to be the best ever.

Sonnen thinks the fight is unpredictable but is on Tony's side as they are former teammates.

“You know, it’s very hard to pick against Khabib with what you’ve seen and I must also share with you I have a bias towards Tony because we are former teammates. I do really like Tony’s chances of going into this, and I like them more and more as the fight gets closer.”

“When you’re 28-0 in any division, man, you claim that division. Particularly when you are the world champion and he already got some heavy lifting out of the way on the way to the title. If you go back and look at the names that he beat – 10-8 rounds against guys, two or three 10-8 rounds against (Edson) Barboza, just by example – this guy is a hammer. But you are talking about Tony Ferguson – that’s a whole other animal.”

“He’ll attack you from the back, he’ll attack you on the walkout, you don’t know what Tony Ferguson would do. I would never count him out. Whoever wins that fight is the best ever.”

UFC 253 Salaries; How Much Money Will Each Fighter Earn? 20 minutes by Jack Ol