Tony Ferguson is a Mexican-American professional MMA fighter who is currently signed with the Ultimate Fighting Championship (UFC). He also goes by the name El Cucoy. He was the winner of The Ultimate Fighter 13. He fights in the lightweight division.

Currently, he ranks #2 in the official UFC lightweight rankings. To know more about his early life, career, highlights, next fight, wife, and net worth, keep scrolling.

Tony Ferguson was born as Anthony Armand “Tony Ferguson on February 12, 1984, in Oxnard, California, United States. He holds the nationality of both Mexico America. His ethnicity is unknown at this time. His astrological sign is Aquarius. 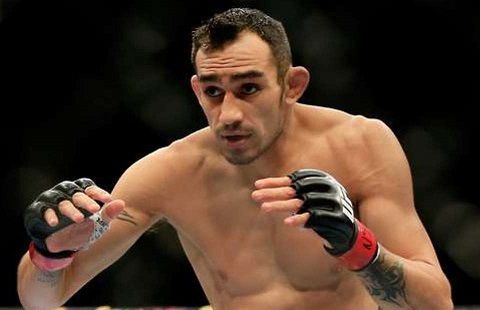 Tony Ferguson was raised in Muskegon, of Mexican heritage. His surname comes from his Anglo-American stepfather.

Tony Ferguson attended Muskegon Catholic Central High School where he played football, baseball, and wrestling. After high school graduation, he attended Central Michigan University before transferring to Grand Valley State University. Before accepting MMA as his career, he worked as marketing and sales in California.

Tony Ferguson started his career in 2008. On his debut match, he defeated Steve Avalos, at the event of CXF: Anarchy at the Arena. He won the fight via submission in the second round. His next fight was against the Brandon Adams, which he won via TKO punches in the second round.

He has an excellent record in mixed martial arts. He has an MMA record of 23 wins in 26 fights. His wins include ten knockouts, eight submissions, and five by decisions. He won numerous awards and championship.

Ferguson was scheduled to fight Khabib Nurmagomedov on 7th April 2018. However, the bout was canceled due to Furguson's knee injury. This is the fifth time Furgusen vs Khabib bout has been canceled. His next fight will be against Anthony Pettis which is scheduled for October 6, 2018.

When it comes to the personal life of Tony Ferguson, it found that he is a married man and has a wife. He married his girlfriend Cristina Ferguson after having a long affair. Before celebrating their marriage in June 2012, they engaged in 2011.

Since getting married to till date, he and his wife are extremely happy in their conjugal life. There is no any rumor in the media about their separation. She gave birth to a son named Armand Anthony on April 28, 2016.

Tony Ferguson Net worth and Salary

Tony Ferguson is one of the influential personality. He has thousands of fan and followers on social networking sites. His fight salary around $250,000. His net worth might be more than a million. He has earned around $982,000 as winning bonus from his career. So, far his disclosed earnings sum up to $1.7 million.