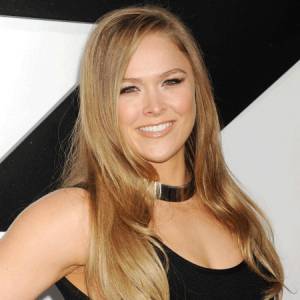 Ronda Jean Rousey was born on February 1, 1987 who is an American mixed martial artist, judoka and actress. Her ethnicity is American. She is the first and current UFC Women's Bantamweight Champion, as well as the last Strikeforce Women's Bantamweight Champion. She is undefeated in mixed martial arts, having won eleven of her twelve fights in the first round and nine by armbar. Rousey was the first U.S. woman to earn an Olympic medal in Judo at the Summer Olympics in Beijing in 2008.
Rousey's mother Ann Maria DeMars was the first American woman to win a World Judo Championship. For the first six years of her life, Rousey struggled with speech and could not form an intelligible sentence. This speech disorder was attributed to being born with her umbilical cord wrapped around her neck at birth. When Rousey was three years old, her mother and father moved from Riverside, California to Jamestown, North Dakota to obtain intensive speech therapy with specialists at Minot State University. She formerly trained at the Olympic training Center in Wakefield, Massachusetts, under the guidance of Jimmy Pedro and is now part of Team Hayastan in Santa Monica, California. She also joined marshal arts training. She is a pro since 2011. Since making her UFC debut in 2013, she has emerged as more than the best female MMA fighter in the world. Rousey is now an author, actress, magazine cover model, fashion icon and sought-after TV guest. She appeared in various Hollywood films. Her list of movie credits includes Entourage, The Expendables 3 and Furious 7. She played the role of Kara in a movie called Furious 7 in the year 2015 and even in this role she did a great job. Her autobiography, My Fight/Your Fight, was published in 2015.
Rousey has managed to keep her personal life very low profile. She is not married at this time and does not have a boyfriend. She does not have children. She has not declared anything about her current affair or her boyfriend and the main reason behind this is might be because she is very shy. She has been linked with many men in the past.
It is all thanks to her hard work that she has been this successful today. Her salary according to UFC 175 in the year is estimated to be $120,000. Also according to some sources, she has a wonderful net worth of 5 million dollars and it has always been on the increasing side. Ronda Rousey is one of the most recognizable athletes in the UFC. She has won most of the knockout fights. Her apparel, gear, and headphones are available at the official UFC store. She is not very tall as she has an average height of 5 feet 7 inches which is around 1.70 meters. She also has the perfect weight of 61 kilograms which matches her height.