Stephanie Nicole Garcia-Colace a.k.a. Nikki Bella is a retired professional wrestler signed to WWE. One of the reigning names in WWE as one half of The Bella Twins is Nikki Bella and two-time WWE Divas Champion, she was the girlfriend of all time WWE favorite superstars John Cena. Besides being a professional wrestler, she is also a model and an actress who has appeared in the television series like Meet My Folks, Confessions of a Womanizer and the Total Divas along with her twin.

Besides, Nikki was one of the celebrity judges in Miss USA 2013 pageant. She generally has appeared with her twin sister in many of the programs, shows as well as in the wrestling arena. They both have provided their voice for the upcoming movie The Flintstones.

Net Worth and Salary of Nikki Bella; Sources of Earnings

Nikki Bella has an estimated Net Worth of $5.5 million in 2019, including all of her properties and earnings. While she earns an annual income of $1 million dollars in 2019.

The Net Worth of Nikki Bella has seen a hike of 19% over the past few years. Furthermore, she owns a million dollar mansion in Los Angeles.

She can be followed in her account in Twitter as well as her biography together with her sister Brie Bella can be found all over the internet which are the best sources to learn about them more.

Nikki Bella's Personal Life; Who is she Dating currently?

Bella has a quite long dating history. She was in relation with Dolph Ziggler which lasted for only 9 months. Further, In May 2014, she had revealed that she had married her high school sweetheart when she was 20 years old.

However, the relation could not sustain and annul after three years of their marriage.

It is well publicized that Bella previously dating the WWE superstar John Cena since 2011. The duo got engaged on 2 April 2017.  On April 15, 2018, the couple announced their separation. 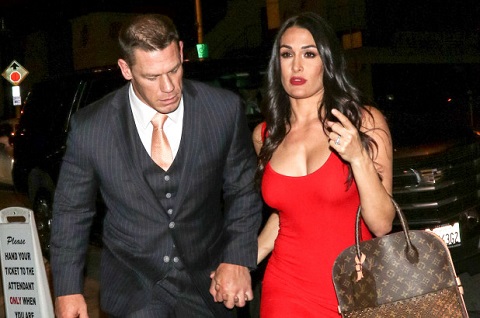 In an interview, Bella revealed that she and Cena clashed over whether to have children, an argument that grew more frequent after her twin, Brie Bella, had daughter Birdie. Cena had previously been adamant about never wanting to become a parent, as well as about never getting married again after divorcing the first wife Elizabeth Huberdeau in 2012.

As of now, she is in a relationship with Dancing With the Stars partner, Artem Chigvintsev.

Well after that season finale First thing I’ll be talking about this Wednesday... oh and all those paparazzi photos (thanks for all the great shots and smashing my food lol) Swipe up in my IG story. #thebellaspodcast #bellaspodcast

The two often shares their adorable picture via their official socials.

35-year-old wrestler, Nikki Bella stands the height of five feet 6 inches and has a very strong built physique. She is sexy as well as tough.

Nikki Bella was born 16 minutes later than her twin sister Brie Bella (Brianna Garcia-Colace) as Nicole Garcia-Colace in the year 1983 November 21 in Scottsdale, Arizona, the United States to parents Kathy Colace and Jon Garcia. Both the twins were keen soccer fans and played for Scottsdale club from their second grade.

Both the sisters attended the same school graduating in 2002 from Chaparral High School. After graduation, they moved to San Diego for college but again moved to LA, working as waitresses to find an agent at the Mondrian Hotel. It was then, they tried out modeling, acting and doing promotional works. Both the sisters had participated in 2006 “International Body Doubles twins search” and also in the 2006 WWE Diva Search but could not make it.

Nikki Bella began her professional wrestling career with her sister Brie Bella, signing the contract with WWE in 2007 and being assigned to Florida Championship Wrestling. They made their debut in a tag match defeating Nattie Neidhart and Krissy Vaine. The duo quickly started the scripted rivalry with Nattie Neidhart and Victoria Crawford and had the series of matches then after.

On August 29, 2008, Brie Bella made her debut in WWE SmackDown. Since debuting in FCW, The Bella Twins have been famous for their switch which they continued in WWE as well. If one of the sisters is hurt, they would switch their place behind the referee’s back and win the match. On the 31 October episode of SmackDown, Nikki revealed herself in SmackDown. While at SmackDown, their on-screen affair with the Colons; Carlito and Primo and The Morrison and The Miz made the storyline.

On April 2009, both the sisters were drafted to Raw as a part of the 2009 Supplement Draft. The twins again made the storyline for fighting over the affection of Daniel Bryan. The feud with Torres was also one of the hit storylines in the WWE that made the twins popular giving out series of matches. On April 6, WWE announced through their website that the tins had been fired by the Executive Administrator Eve Torres. Later onwards, they appeared in independent wrestling show in Newburgh at Northeast Wrestling and in CTWE Pro Wrestling. However, on March 11, 2013, they made their return to WWE.

Nikki was seen playing together in the ring along with her twin sister Brie. However, Nikki earned the solo identity after winning the match against AJ Lee at Survivor Series with the little help from her sister Brie. It was Nikki’s second win to Divas Championship. She is currently holding the Divas Champion belt. Nikki is known for her Nikki Rack Attack, which is her finishing move.