Yuriorkis Gamboa is a Cuban professional boxer who is a former unified featherweight world champion. Between 2009 and 2011, he held the WBA and IBF titles as well as the WBA interim championship in both the super featherweight and lightweight divisions.

How Much Is Yuriokis Gamboa's Net Worth in 2021?

As of 2021, Yuriorkis Gamboa has a net worth of $2 million. He saw his career's highest purse $1 million in a fight against Gervonta Davis on 28th December 2019 for WBA (Regular) lightweight title. It's not a secret, Gamboa makes at least six-digit figures per fight. However, his total career earning is yet to disclose.

MMA has sponsorship and endorsement like any other sport.

Besides, there is not much information about his real estate or investment but seen flaunting the world's expensive car on his Instagram.

Dunia said she tried to leave their Miami home because she felt the boxing was cheating on her and when she threatened to take their son with her, Gamboa grabbed the back of her neck and arm.

Gamboa cleared that he did try to stop her from taking his son with her but not abusively. Gamboa's lawyer further stated "There were not hits, or excessive violence. We are sure that this incident will not affect the career of a boxer like him..." 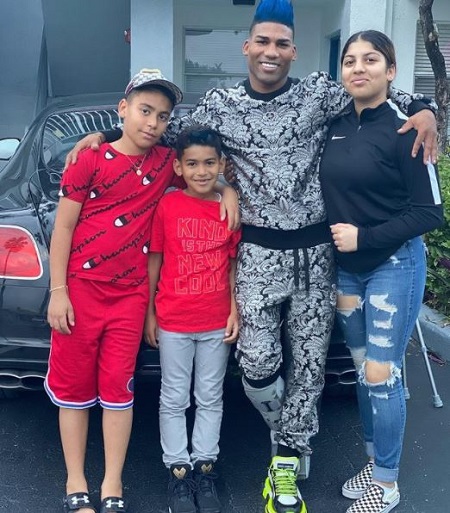 Since there is no personal scene of Gamboa in the media. Though the case eventually settled down after a while it seems, the boxer had not reconciled with his wife.

On 27th April 2007, Gamboa made his professional boxing debut in Hamburg, Germany against Alexan Manvelyan. He won the fight via UD. He had his next fight in Turkey Atatürk Sports Hall, Ankara, Turkey against Araik Sachbazjan on 16th June 2007.

On 28th June 2014, he competed for WBO lightweight title but was defeated by Terence Crawford.

On 28th December 2019, he challenged Gervonta Davis for WBA (Regular) lightweight title but lost the bout.