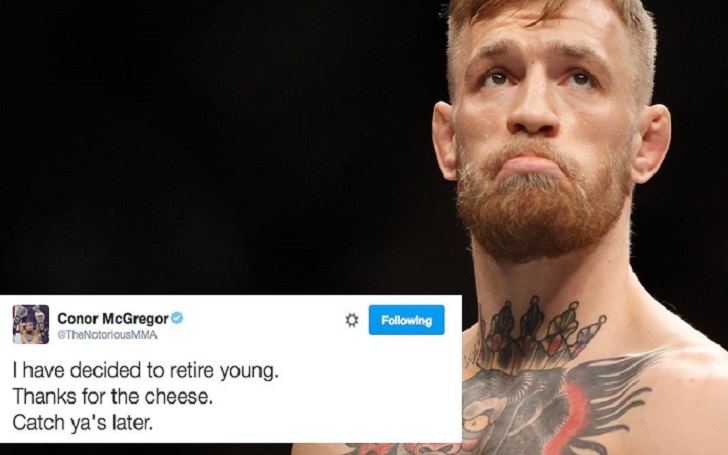 Conor McGregor shocked the fight fans with his retirement announcement on Tuesday morning on Social Media. While the UFC and MMA fans apparently took it as a publicity stunt, the UFC president Dana White said it “totally makes sense.”

McGregor last fought Khabib Nurmagomedov at UFC 229 in October 2018 where he was forced to submit the bout in the fourth round.

Hey guys quick announcement, I’ve decided to retire from the sport formally known as “Mixed Martial Art” today.
I wish all my old colleagues well going forward in competition.
I now join my former partners on this venture, already in retirement.
Proper Pina Coladas on me fellas!

Several UFC fighters reacted to the Notorious' retirement and some believed he is not retiring yet.

There can be only one king in the jungle.
Only pic.twitter.com/BuqVNUkoR0

Second round is on me https://t.co/1liGxXhVTG

See you at ‘mania brother

Hmmm.. to young bro @TheNotoriousMMA the whisky high don’t compare to getting that arm raised. Not much does! U going to miss it! Buckle down and train youngster https://t.co/PQQcZzQrsw

Text from Dana White: ""He has the money to retire and his whiskey is KILLIN it. It totally makes sense. If I was him, I would retire too. He's retiring from fighting, not from working. The Whiksey will keep him busy and I'm sure he has other things he's working on."

Get in make money get out.
Much respect to Conor.
He’ll be back though for sure! https://t.co/V1mMpPHini

Hey guys just a quick announcement! I’ve decided to retire from eating @KFCAustralia today and switching to a better and healthier option...trying to decide which ?? thoughts? #BetterLiving ????

I’ve come out of retirement.

Few hours after his retirement news, the New York Times reported that the former UFC lightweight champion is under investigation for the sexual assault in Ireland.

UFC 253 Salaries; How Much Money Will Each Fighter Earn? 3 days by Jack Ol