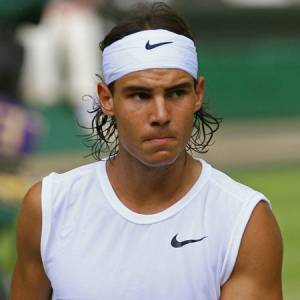 Rafael Nadal also called as "The King of Clay" is a professional Spanish tennis player. He is widely known as greatest clay-court player and is one of the youngest players to achieve Career Golden Slam. During his career, he has won  15 Grand Slam singles titles and the 2008 Olympic gold medal in singles.

Moreover, Nadal has also won an all-time record of 30 ATP World Tour Masters 1000 titles the and 18 ATP World Tour 500 tournaments. His current net worth is $140 million.

Rafael Nadal was born on  June 3, 1986, in Manacor, Spain. He was born to Sebastián Nadal and Ana María Parera. His father business man and owns his own insurance company a glass and window company as well as a restaurant. He grew up along with his sibling sister  María Isabel. Since his childhood, he started playing tennis with his friends.

Rafael Nadal was very active and talented player since his childhood. He won his first under-12 regional tennis championship at the age of 8. Moreover, at the age of 12, he won the Spanish and European tennis titles. Because of his excellent performance,  Spanish tennis federation requested him to get training at Barcelona. Wel, at the age of 15 he won two events on the ITF junior circuit. Furthermore, he also won ATP Newcomer of the Year Award in 2003.

At the age of 17, Nadal defeated Roger Federer. Following year, he also won the French Open. Nadal won his first ATP title on 29 April 2002 and he became the ninth player to win it before the age of 16. In the same year, he won other two challenges titles.  He became the youngest player in the country to win the Davis Cup at the age of 18 by defeating  Andy Roddick in the finals. During his spring clay court season in 2005, he broke the record of  Andre Agassi by winning  24 consecutive singles matches. He won the French Open for the first time and also became the first teenager to win the Grand Slam title. In September he won both matches at Davis Cup as well as fourth ATP Masters Series title in October.

Following year, he also won the Golden Bagel Award. Due to the foot injury, he wasn't able to play well in 2006. So he lost most of the matches. Moreover, he also injured his shoulder while playing Artois Championships. However, in 2006 he was able to win his second French Open and became the first player to finish the year as the world No. 2.  In 2007 he participated in most of the tournaments, but he failed to get a good result. Well, he just won the French Open for the third time.Mikhail Youzhny In 2008 he Nadal performed the best. He lost the final match at Chennai Open with Mikhail Youzhny.

Following year he won Open Sabadell Atlántico as well as his fourth French Open.  He also won the Wimbledon cup for the first time and became the third player to win both titles same year after Rod Laver.  Nadal defeated Novak Djoković and Fernando González at 2008 Beijing Olympics and received a gold medal. Following year he became the world no. 1 ranking. Coming to 2009, he won the Australian Open but he failed to win French Open. He also won the 2009 Indian Wells Masters. Because of the loss in most of the tournaments, he came to the world no.2 ranking. In the starting of 2010, he won the Capitala World Tennis Championship in Abu Dhabi.

Following year he won three Grand Slams and three Masters 1000 tournaments and he again reached the world no. 1 ranking. In 2011, Nadal won the French Open for the sixth time. Moreover, he also won the Mubadala World Tennis Championship in Abu Dhabi. Along with his partner  López he won the doubles title at Qatar ExxonMobil Open. For the seventh time, he got the victory at French Open in 2012. But due to the poor performance, he ended the year with the world no. 4 ranking.

Well, coming to 2013, he won both the French and US Open titles. And he again reached the world no. 1 player.  Nadal captured the French Open title for the ninth time in 2014. Following year he wasn't able to perform well due to the injury. He faced great difficulties in his games due to the injury in 2015 too. So it resulted in the degradation of his ranking. However, there was an improvement in his games in 2016 tournaments as he won 28th Masters title. Moreover, he also claimed a gold medal at  Rio 2016 Olympics.  Coming to 2017, he won the French Open title for the tenth time.

Rafael Nadal with a great personality is not married yet. But he is dating his girlfriend Xisca Perelló 12 years. They started their love life on 7 December 2005.

After dating for four years, they engaged on  21 April 2010. He is equally maintaining his professional life as well as love life. He gives his equal time to his girlfriend and is often found spending their time together. Although it has already been a long time that they are engaged, they haven't married yet.

According to some sources in 2015, Perellóhase agreed to wait for some more time to get married. Besides this, there are no any records of his other relationship.

31 years old Nadal has a perfect height of 1.85 m and weight 85 kg. His nationality is Spanish and falls under white ethnic group. Besides his profession, he loves playing football, golf, and poker.

Net worth and other facts

Nadal is one of the richest tennis players. Well, his current net worth is $140 million. During his whole career, he has won $86,111,497 as a prize money. Nadal owns a Parera Luxurious Home worth several million.

Rafael Nadal and his car

He also owns a luxurious Ferrari 458.

Rafael Nadal and his car

Its cost is $245,690. Well, he seems to have a good taste of luxurious and expensive cars.