20 times Grand Slam singles title-winning tennis player, Roger Federer currently ranked world No.3 in men's singles tennis by the Association of Tennis Professionals (ATP). The 37-years-old Swiss tennis player has also held the world No. 1 in the ATP rankings for a record total of 310 weeks, including a record 237 consecutive weeks.

A professional since 1998, Roger Federer's net worth is approximately $450 million with an annual estimated salary of $70 million as of 2019. Furthermore, he is married to a Swiss former professional tennis player, Mirka Federer. Together, with his wife, he has four children: Myla Rose, Leo, Lenny, and Charlene Rive Federer.

Roger Federer Net Worth and Earnings

As of 2021, Roger Federer has an estimated net worth of $450 million, mostly earned through his tennis career.

Since Federer turned pro in 1998, he and Nike have been joined and earned nearly $150 million from the $35 billion-in-revenue sports giant over the past two decades. But Federer's Nike deal expired in March 2018, and he just inked a 10-year apparel deal with Japanese brand Uniqlo.

Many of Federer's sponsor relationships run a decade-plus. His other partners include Rolex, Wilson, Credit Suisse, Jura, Moet & Chandon, Sunrise, and NetJets.

Cristiano Ronaldo and LeBron James are the only athletes on the planet with relative endorsement incomes to him over the last 12 months.

In 2018,  Federer sold his Wollerau house for undisclosed worth. But back in November 2017, when the house was listed on sale, on real-estate websites, it was 5.4 Swiss Franc, equivalent to $5.3 million. 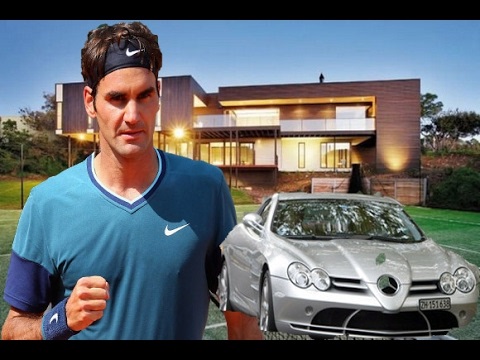 Federer now lives in Varbella, where he recently purchased a $5.8 million lavish mansion. Furthermore, during winter, he resides in Dubai, where he owns a luxurious apartment.

Charity and Other Business Ventures

In 2003, Roger founded the Roger Federer Foundation to aid poor children and to promote their access to education and sports. Further, he started supporting the South Africa-Swiss charity IMBEWU, which helps children better connect to sports as well as social and health awareness.

In April 2006, he became a Goodwill Ambassador of UNICEF and has appeared in UNICEF public messages to raise public awareness of AIDS.

After the 2010 Haiti earthquake, he collaborated with fellow top tennis players for a charity event in the 2010 Australian Open named 'Hit for Haiti', in which incomes went to Haiti earthquake victims.

Additionally, Federer participated in a follow-up charity exhibition during the 2010 Indian Wells Masters, which raised $1 million. Also, the Nadal vs. Federer "Match for Africa" in 2010 in Zurich and Madrid collected over $4 million for the Roger Federer Foundation and Fundación Rafa Nadal.

Who is Roger Federer's Wife?

Roger Federer, 40, is happily married to former Women's Tennis Association player Miroslava Federer. The duo met for the first time while they were both competing for Switzerland at the 2000 Sydney Olympics.

Soon, the pair developed liking each other which eventually bloomed into a romantic love affair. After dating for years,  the couple decided to take their relationship to a whole new level and exchanged the wedding vows at Wenkenhof Villa in Riehen near Basel on 11 April 2009, in an intimate ceremony surrounded by a small group of close friends and family.

"... Their twin girls, Myla Rose and Charlene Riva, arrived in 2009, followed by the boys, Leo and Lenny, five years later. Twelve days after the girls were born, the whole family decamped to Montreal for the Canadian Open. How many nappies did he change between matches? “I did a ton of them,” he laughs.Federer’s “kiddies” are currently home - schooled. He wants them to enter mainstream school in Switzerland once he retires, but until then they travel with a nanny and a teacher. Travelling on tour with his family makes for interesting sleeping arrangements, but there is one concrete rule: “I refuse to leave the bed with my wife,” he says. “[I say] ‘We always wanted to have kids, but my [initial] dream was to be with you and not in another bedroom on another floor.’ I’d rather sleep with kids screaming than away from my wife.” How will he cope when, in a few years, Charlene and Myla are begging for Instagram accounts and wanting to go on dates? “I’m ready for it,” he says with a wry smile. “I was a child who tested the limits, so I’ll have some sympathy for them.” When it comes to envisioning life post retirement, he’s vague about his professional plans - though I’d predict a fashion line and more ventures from his sports agency, Team8, which helped launch the Laver Cup tournament in 2017. Personally, though, he’s already got it all worked out. “Because I’ve flown so much, I’d like to do a road trip — go through Italy, Germany, France, Scandinavia. I don’t know London that well, so I’d like to have time to experience it properly and say, ‘Tourist Roger is here!’” It strikes me that Federer’s fans are far more agitated about his retirement date than he is. Having invested so heavily in his career, they can’t bear the thought of it spluttering to a disappointing, unglorified finish. Will they get their happy ending? “The only thing I care about is my wife, my children and my friends,” Federer says, smiling. “Tennis? Great. If I win more — fantastic. If I don’t, it’s all good." " #mirkafederer #mirkafedererfanpage #Federer #RogerFederer #RF

Talking about his physique, he stands 1.85 m tall and weighs around 85 kg.

A native of Basel, Switzerland, Roger Federer was born in the year 1981, on August 8, to Lynette Federer and Robert Federer.  His star sign is Leo. As per nationality, he holds both Swiss and South African citizenship, since his mother is South African, and belongs to mixed ethnicity.

Further, he was raised alongside his siblings named Diana Federer.

Since turning professional in 1998, Federer was continuously ranked in the top ten from October 2002 to November 2016. Nonetheless, he re-entered the top ten after his victory at the 2017 Australian Open.

Federer has won a men's record eight Wimbledon titles, one French Open title, a record five consecutive US Open titles, and a joint-record six Australian Open titles. Furthermore, the hunk is one of eight men to earn a career at Grand Slam.

Federer has reached a record 30 men's singles Grand Slam finals, including 10 in a row from the 2005 Wimbledon Championships to the 2007 US Open.