Egan Arley Bernal Gómez widely recognized as Egan Bernal is a Colombian Cyclist who is currently signed to UCI WorldTeam Team Ineos. Further, he became the first Latin American to win the 2019 Tour de France in 2019.

As of 2020, Egan Bernal is currently under 5-years £12 million ($14.8 million) contract with Team Ineos which place him an annual salary of £2.4 million ($2.97 million). Reportedly, in the cycling five-year contracts, are extremely rarer, even more so when involving the huge salaries that Team Ineos offer. But Brailsford believes Bernal is worth it.

Besides salary from the team, a cyclist earns much from win prize money and so do Egan. From his most recent win at Tour de France Egan Bernal (Ineos) summoned €500,000 (£426,500) plus €500 for every day spent in the leader’s position. Taking second place, was Jumbo-Visma, who had Steven Kruijswijk on the third step of the podium, with a total of €203,400 and next Julian Alaphilippe with €189,940.

Looking at Berna's contrast, salary, and prize money, his net worth in 2020 is approximately $5 million.

Bernal is often cheered on at his cycling events by his girlfriend Xiomy Guerrero, who also hails from Colombia. Guerrero studies finance and international business. Like her beau, she also enjoys cycling in her own time. Currently, he duo lives in the Colombian city of Zipaquira, just five minutes away from Bernal’s parents.

Guerrero regularly posts messages of support for Bernal on her Instagram page.

After taking the yellow jersey for the first time, Bernal said: "It's really special to have my girlfriend here." Further, he added, "She has been there since the start. Sometimes when preparing these big races we have to make huge sacrifices, and she has always been there for me."

Egan was born to parents Flor Gómez and Germán Bernal. He has a younger brother named, Ronald Bernal. 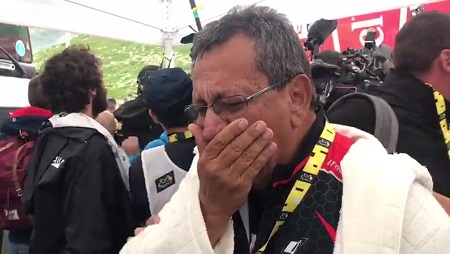 His father German was also a “strong rider.” This surrounded Egan with a cycling environment, which led to him jumping on a mountain bike at age 8. He started watching races such as the Giro, Tour, and Vuelta as a kid. However, it took some peer pressure to finally get Egan into the competition.