After years of hard work pay off, some people come to the spotlight and some through their relationships with reputed ones. Morgan Poole also similarly rose to fame. Poole is better known as the wife of an American professional basketball player for the Los Angeles Clippers of the National Basketball Association, Eric Bledsoe.

Morgan Poole was born in the 1990s. She rose to fame only after her relationship and was not open about her private life.  Also, The wag has not shared about her education and academic qualifications.

Morgan and Eric walked down their wedding aisle on July 1, 2017, at a private wedding ceremony in front of their parents and close friends in their hometown. As per sources, Poole and Eric got engaged in August 2016 while they were on a drive. Some sources claim them to be High School Sweetheart and met each other at Parker High School. 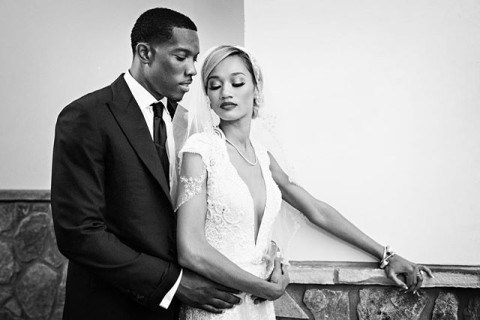 Morgan along with Eric at their wedding day SOURCE: [email protected]

On the other hand, Some mention that they met each other in 2008 and have been together since then. In the beautiful wedding ceremony, Eric had called his former teammates, John Wall and DeMarcus Cousins, who were groomsmen. It's been more than a decade of their relationship and five years of their marriage, and there have been not many rumors of the couple having ups and downs.

Morgan and Eric had two children before their wedding in 2017. They had a son and daughter from their happy relationships. Lately, The couple has welcomed their third child. Morgan was an active social media user but had stopped her social media presence and deleted her accounts. In addition, Although Eric has a social media account but is not much active.

Eric Bledsoe has an estimated net worth of more than $50 Million. He has earned most of his net worth through his career in the NBA. In 2014, Bledsoe signed a five-year, $70 million contract with the Suns. He was among the highest-earning player in the league. After spending his four seasons with the franchise, Eric moved to Milwaukee Bucks, where he signed a four-year, $70 million contract extension with the Bucks. Totaling his career earnings to date, it sums to $126,752,507.

Morgan keeps herself busy looking after their children. She has not taken any professional jobs as her profession. Eric has been playing professional games for almost a decade. In 2010, Bledsoe listed his name for the 2010 NBA draft, and Oklahoma City Thunders drafted him with the 18th overall pick. He was then traded to The Clippers and averaged 6.7 points and 3.6 assists.

In 2013, Bledsoe got traded to the Phoenix Suns and played for the next five seasons. After controversies with the club, Eric moved to Milwaukee Buks and played with the team until 2020. Last season, He played for  New Orleans Pelicans. He is having a bad time with his game and has rejoined with the Clippers.