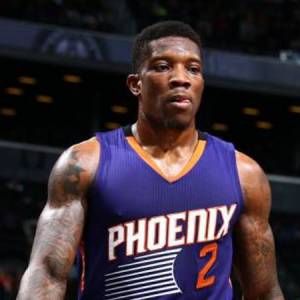 Eric Bledsoe is an American professional basketball player who currently plays as Point Guard for the Milwaukee Bucks in the National Basketball Association (NBA). The 29 years old professional has played for clubs like the Los Angeles Clippers, Bakersfield Jam, and Phoenix Suns.

As of 2019, he is receiving an annual salary of $15 million which has boosted his net worth to $48 million. Furthermore, he is married and blessed with two children with his wife.

Eric Bledsoe Net Worth and Endorsements

As of 2019, Eric Bledsoe has an estimated net worth of $48 million in 2019, including all of his properties and incomes.

He owns a 9,000-square-foot mansion in Scottsdale worth $3.7 million. The house has 6 bedrooms with a mosaic-tiled pool, lots of areas for outdoor entertaining, a white marble-tile staircase and master bath with a shower. They bought the house for $1.55 million in 2012.

Eric Bledsoe is married to his longterm loving partner Morgan Poole. The couple is in a relationship since 2008. After dating each other for six long years the couple engaged in August 2016. The marriage ceremony was held on 1st of July 2017, in his hometown Birmingham, Alabama, among their family and friends.

His wife Morgan is a hair stylist. His former teammates John Wall and DeMarcus Cousins had also attended the ceremony.

Baby girl did her thing today! Won two of them thangs! Thanks coach @bundagrandee for staying on her... @mrs_morganb she growing up on us

The couple together has two children, a son, and a daughter. Their first son is named Ethan Bledsoe and the name of their daughter is Ariana Bledsoe. The couple is living happily together without any disputes or divorce.

Bledsoe was subsequently selected with the 18th overall pick in the 2010 NBA draft by the Oklahoma City Thunder but was later traded to the Los Angeles Clippers in 2010. While his first season with the club he averaged 6.7 points and 3.6 assists and started 25 games for the team and was named to the NBA All-Rookie Second Team. He played only an average of 11 minutes per game, with only one start, and his stats dropped in his second season with the club. After three seasons with the club, he ended and left for Phoenix Suns in 2013.

He was traded to the Phoenix Suns alongside teammate Caron Butler on 10 July 2013. He made his club debut in a match against Portland Trail Blazers, he helped his team by getting 22 points, 6 rebounds, and 7 assists in a 104-91 victory. Bledsoe hit his first ever game-winning shot in an 87-84 home victory over the Utah Jazz in his second game for the club.

Bledsoe also got his career first double-double with the Suns by scoring 16 points, grabbing 11 rebounds, and putting up 7 assists in a blowout 117-90 victory over the Los Angeles Lakers on December 23, 2013. He scored 30 points, setting a new NBA career high, in a 109-93 victory over the Portland Trail Blazers on 4 April 2014. Suns extended a qualifying offer to Bledsoe, thus making him a restricted free agent on June 27, 2014.

He was then traded to the Milwaukee Bucks in exchange for Greg Monroe and a protected first and second-round draft pick, on 7 November 2017. His debut for the team came on 10 November, recording 13 points and seven assists in a 94–87 win over the San Antonio Spurs. He still plays for the club. 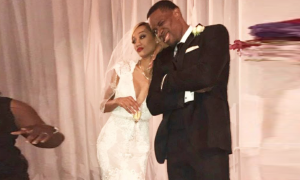 Eric Bledsoe Married to Morgan Poole and Living Happily Together. Know about their Married Life 2 years by Jack Ol