Elise Pollard Tate is a well-known rising American player's wife. Elise came to the spotlight after tying her wedding knot with American football wide receiver playing for the New York Giants, Golden Herman Tate III. The love birds have been married for more than six years.

Elise Pollard Tate was born on January 29, 1988, in San Diego, California. Elise rose to fame through her relationship life so, much information about her early life and her parents is under the radar. After graduating from High School, Pollard enrolled at the University of Washington, where she completed her bachelor's degree.

Elise and Golden tied their wedding knot on March 11, 2017, in Cabo San Lucas, Mexico. The love birds had been dating each other for more than five years before walking down their wedding aisle. Tate decided to propose to his girlfriend, Elise Pollard, on September 12, 2015, in San Diego. They had a lavish wedding. 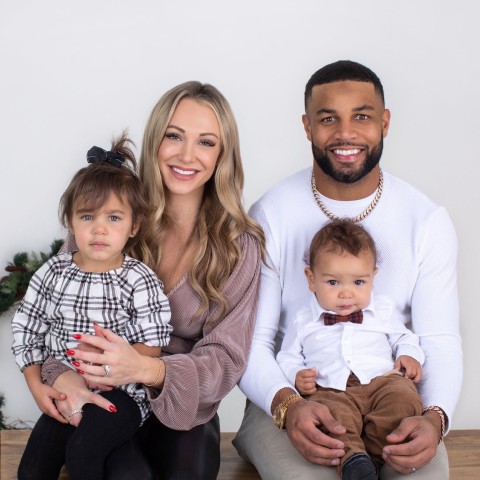 CAPTION: Elise along with her husban and thier children SOURCE: Twitter @ Golden Tate

Golden gave her a 5-carat wedding ring by Chase Gregory Jewelers after giving her a 6-carat cushion-cut diamond engagement ring. Tate’s wedding ring has 140 black diamonds and seven white diamonds.  They also had a yacht party to celebrate the wedding. Elise and Golden have two young children, a daughter named Londyn and a son named Golden.

Elise and Golden are an active social media user. Both of them keep sharing photos of  their vacations and tours regularly to their followers. They seem to be very much supportive of each other.

Elise workes as a director of business development at Harvey Nash. She’s been working for the IT recruitment firm since 2010. She worked at their Seattle office while Tate was playing there for the Seahawks. She has a degree in Marketing and Sales from the University of Washington. elise Pollard Tate has an estimated net worth of more than $100,000.

Elise husband Golden Tate has an estimated net worth of more than $40 Million. He has earned much of his net worth through his successful career as a football player. Tate signed a $3.261 Million contract of four years with Seattle Seahawks in 2010. In 2013, Tate moved to Detriot Lions and signed a $31 Million contrct of four years, which included $13.25 Million guaranteed.

After finishing his four season, Golden moved to the New York Giants and signed four-year, $37.5 million contract that included $23 Million guaranteed contract. The Giants released him in early 2021 and many top franchise are keeping a close eye on him. Golden owns a beautiful home in San Diego. He bought the Mansion for $2.599 million. The custom-built house evokes the mission style of Santa Barbara with its white-stucco exterior, clay roof tiles and arched windows.

There are two master suites for a total of five bedrooms and seven bathrooms in more than 6,300 square feet. Lawns and landscaping fill the grounds, which take in ocean, greenbelt and mountain views.