Julio Cesar Martinez is a well-known Mexican professional boxer. He has been fighting in the professional ring since 2015. Julio has been the WBC flyweight titleholder since 2019 and ranked as the no.1 flyweight boxer. Martinez has not lost a single game after losing his debut professional match in 2015.

Julio started training boxing from a very early age. He had a good amateur career before turning professional in October 2015. Martinez made his debut against Joaquin Cruz and lost the match via Split Decision. The boxer won his first professional match in March 2016 against Sergio Granados via TKO. Until March 2019, Martinez fought in fifteen matches and won all of the matches since losing the first one. Julio challenged Charlie Edwards for the WBC flyweight title. He initially won the match via a KO but ruled NC after Edwards hit while he was down. In December 2019, Martinez challenged Cristofer Rosales for the vacant WBC flyweight title and won the match via TKO. Cesar defended his titles against Joel Cordova, Moises Calleros, and Jay Harris in the next three matches.

Martinez is set to defend his WBC flyweight title giant McWilliams Arroyo. SNHU Area, Manchester, New Hampshire. The pair was originally scheduled to face each other on February 27, 2021, before Martinez withdrew due to a hand injury.

Yes, You read that right. Julio is a proud father of two children. Although He is an active social media, Martinez has successfully kept his personal life away from the reach of media. The boxer rarely shares photos of his children. Following his posts, it seems like Julio is married to his girlfriend, Diana Perez. 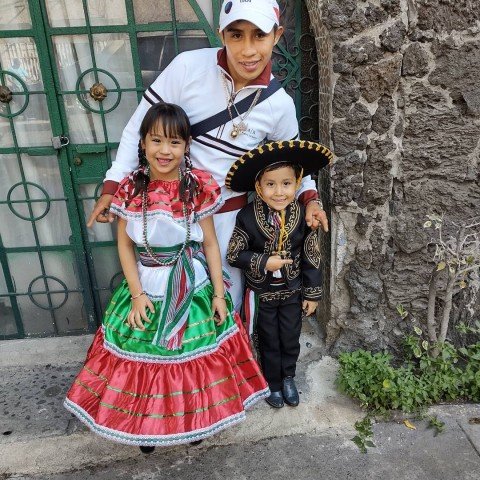 Julio has a daughter named Miranda Zoe Martinez. Much about their birth date is still under the radar. The family of four is living a happy married life. Martinez likes to spend his free time with his children and is very supportive of them.

Know About Julio Cesar Martinez's Net Worth and Earnings