Custio Clayton is a famous professional boxer from Canada who has held the WBA-NABA welterweight title since 2019. The Canadian ranks top 5 contenders in the WBO IBF rankings. As an amateur boxer, Clayton has become six times Canadian national champions and has represented his nation in the 2012 Olympics.

On 5 October 1987, Custio Clayton famously known by his name War machine was born in Dartmouth, Nova Scotia, Canada with a star sign Libra. Presently, the Canadian boxer is 34 years of age. Talking about his physical appearance, he stands tall at 5 ft 9 inches and weighs 69 kg.

Nova Scotia boxer Custio Clayton is a loving son of his mother Elizabeth Clayton and his father's identity is under the radar. talking of his own family Custio has a family of six, including his wife and four children. His eldest daughter's name is Cheyla who turned 16 on 23 July 2021. Custio hasn't flashed anything about his other children.  However, he posts their pictures on his social media.

When it comes to relationship status, he is very open about it. He gives his fan a space to sneak into his personal life via social media. Six-time Canadian amateur champion Custio is happily married to his beloved wife, Charis Clayton. Before tying the permanent knot, the love birds dated for some time. In Dec 2021, the duo finally exchanged their vows and lived happily. The Clayton family is blessed with two daughters and two sons. The duo is loving their parenting to the fullest.

Dartmouth-born boxer Custio kicked off his boxer journey from an early age. He initially trained at his uncle's gym, City of Lakes Boxing Club in Dartmouth, Nova Scotia. War machine nickname Custio fought his first-ever amateur bout at age 11. After that, he took a break to finish high school.

Talking about his professional career, Clayton officially joined the Group Yvon Michel gym in November 2014. He is still struggling to get limelight among like famous boxers. Canadian nationality fought his first professional welterweight boxing match on 19 Dec 2014 against Sophyan Haoud. His last fight was against Cameron Krael on 11 Dec 2021, which he won by decision. 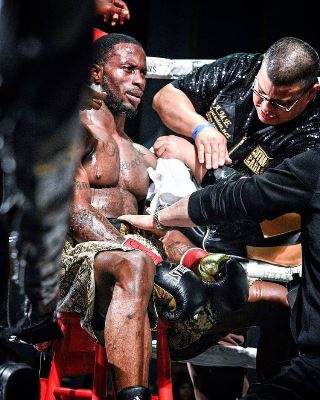 Custio Clayton decided to fight in the light-middleweight present but is yet to debut his Light middleweight fight. It will take place on 19 December 2022 in a gala featuring Adonis Stevenson in Quebec City. Observing his boxing records is very impressive. The Vova Scotia boxer has a record of 19 fights in which 18 wins, 12 by KO, six by decisions and one draw.

The Canada international has also represented his nation in Olpyics as well.

The net worth of Canadian War Machine Clayton in 2022

34-years old boxer is a well-established athlete who has been in this line for more than 15 years. Presently, he is living a comfortable and lavish life with his family. As of Oct 2020, current defending IBF champion Clayton made $250000 from his pay-per-view fight. He also loves wearing expensive jewelry.

As per our research, he has an approximate net worth of around $5 Million. Apart from boxing, he also adds up his net worth through his commercial ads and sponsors.

Read more about other athletes at Playerswiki