Is Ben Askren Married? His Wife, Relationship, and Married Life

Askren who recently made his UFC debut against former Welterweight Champion Robbie Lawler gained popularity for his 1st round victory against Lawler. The match was also highlighted for the controversial stoppage by the referee Herb Dean.

People might be wondering about Askren's personal details like is he married? Who is his wife? Here we have all the details about his relationship status.

Yes, Ben Askren is a married man. He got married to his wife Amy Askren on April 9, 2010. With the marriage of about a decade, the couple is also blessed with three children. 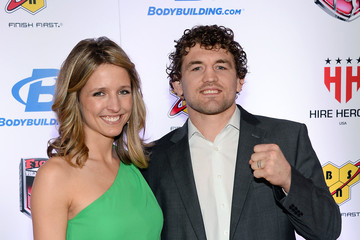 The first two children of Ben Askren are daughters while the third child is known to be a son. Askren hasn't shared any details about his family. Moreover, he has made very less personal posts on his social sites, however, he has posted some photos of his children.

Asia was fun, but there is no place like home!

Ben Askren Past Relationship and Bio

No any details about his past affairs and girlfriend is available. As he has been married to his current wife, Amy Askren for around a decade, the couple probably might have been together for more than a decades.

The UFC star was born in on July 18, 1984, in Hartland, Wisconsin, the US to Michele Askren and Chuck Askren. Askren is an American by his nationality and his ethnicity is white. He has a younger brother named Max Askren.