Fan Question: Are Jon Jones And Holly Holmes A Couple? What's Going On?

Let's say if you have a similar career, have trained together several times and have a good bonding as friends you will dwell into controversies related to affair especially if you are of two opposite sexes. If you are Jon Jones, one of the most decorated fighters in the history of MMA and someone as legit as Holly Holm, people will hope they get together and sometimes rumors are ignited by fans themselves.

But when these two share screens together, people suddenly go wooing and gossiping if something is actually going on between these two. Here is a fan question that was thrown around to Playerswiki since the UFC 241's fight week started.

Johny Bones is a gifted individual who has overcome all adversities which includes a lot of bad decisions but he is undeniably a loving father and a caring fiancée to Jessie.

"Philippians" tattooed on right side of Jones' chests speaks loudly about how he wants to lead his life. But yes, it's undeniable that we too see some chemistry in Holly-Jones videos. They are best of friends but nothing can prove that they are dating or whatever. 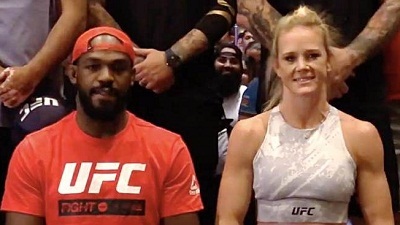 So, how will you define Jones Relationship with Holly? Jon Jones considers holm as his sister. Recently on MMA fighting, he explained how Holly inspires him as a sister. So, please friends, don't over think, people, can have different relationships other than being a couple.

The video speaks a lot about Jones relationship with Holm, doesn't it?

As per TMZ Holly Holm has filed for an official divorce with her husband Jeff Krikpatrick, the report from TMZ came out in January of 2019, which stated that the former bantamweight champ is officially trying to get out of her married life.

Holly Holm in her case has reportedly stated:

"incompatibility because of discord and conflict of personalities. Holm says the two separated in March 2018 and no longer live as husband and wife"

So, clearly Holly wasn't with her former husband since 2018, and that means she might be up for dating someone that will value her but she isn't a housewrecker. She is in good terms with her trainers, friends and even fans but people who ask these question tend to create bitterness in the lives of many celebrities and we don't want to circulate any hate so we are keeping the names of people who requested us to answer this particular question anonyms but yes here is your answer:

No, they are very good friends, we like seeing their fiery chemistry together but they are not dating as of 2019.