Dana White to Logan Paul: Trust me, don’t play around over here, You will get hurt 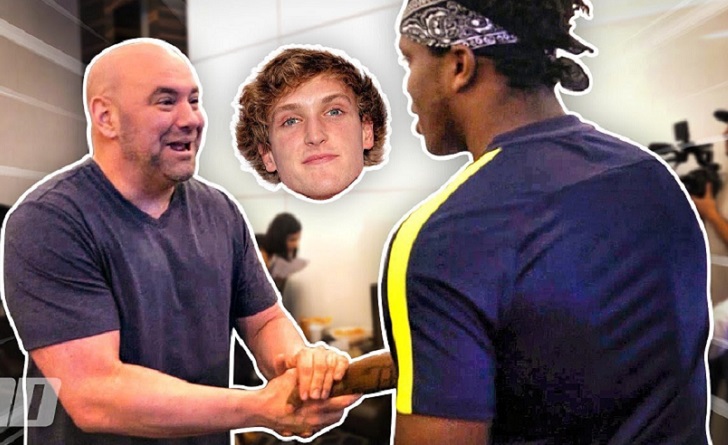 YouTube megastar Logan Paul has shown interest in fighting in the Octagon and has told it to the TMZ's reporter and even tweeted about it.

The 23-year-old youtube superstar has already boxed with KSI and even sold around 800 thousand Pay-Per-Views for around $10 each, and honestly, it's huge. Further, he has a wrestling base, which is a good place to start with.

Paul and KSI  are now expected to settle the bout in U.S. soil but Logan Paul also wants the Octagon experience and has expressed it time and again till it reached Dana's ears, but on UFC 229's press conference, UFC President Dana White told that he wants no-piece of it.

“That guy would get murdered here, He would get hurt badly. If I ever let him fight in the UFC, I should be arrested.”

Dana, before anyone could raise a question about him letting CM punk fight inside the cage defended his previous decision and added:

“I know everyone is going to say, ‘You let CM Punk fight in the UFC [Chuckles] Look, I have no hate for Paul. Look at the business that guy has built on YouTube and the number of pay-per-views they did on YouTube. They did 800,000 at 10 bucks for two guys that fight fans have never heard of. So he’s built a great business for himself and good for him. But trust me, don’t play around over here. You will get hurt.”

the thought of securing a fight in the @UFC is exciting... could finally use my wrestling background... but i hear some other celebrities/athletes want to catch these hands first?

So, this clearly shows that the UFC president is aware of PSY Vs. Paul's business and Dana is a pretty wise businessman, given that Logan Paul is only 23 years old and already has a wrestling base, if he puts a necessary effort to it, he would actually be able to fight, and Dana despite saying no, should have thought about the idea, and again, we know several instances where he is seen discarding a possibility but at the end, backing it up too, right?