Conor McGregor Training hard despite Injury; Is he Planning for the UFC comeback? 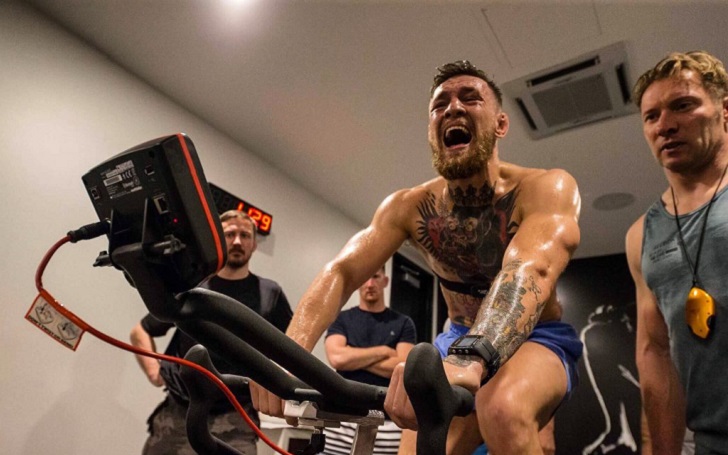 Conor McGregor is believed to be plannings to make his Octagon return this year this is why he hasn't given up his training despite meeting an injury. He was photographed training recently though he reportedly has injured his hand.

The photos later immersed on his social media accounts.

The Notorious posted the photos of his training session at Crumlin Boxing Club on June 2 where he captioned, "where there's a will there's a way". Followed by that, he has again shared another picture where the Irish UFC star can be seen cycling on an exercise bike in the garden of his home with his youngest son next to him.

With a shoutout to his fitness progress McGregor FAST, he wrote,"Improvise. Adapt. Overcome!"

Not only this, but the former double-division champ had also made a post on May 24 with a caption:

Intense training and sparring sessions, I will always push it to the limits.
This comes off and I push on!
The Proper Don!
Nothing will stop me.

Intense training and sparring sessions, I will always push it to the limits. This comes off and I push on! The Proper Don! Nothing will stop me.

While everyone is hoping to see him on the action, UFC President Dana White has a different opinion. He believes, The Irishman has everything so, he chooses when he wants to fight.

“What did I say leading up to the Mayweather-McGregor fight? [That he may never fight again]. Did I not say that? And how many times has he fought since then? Once. Conor is in a very unique position as a fighter. He has tons of money. His whiskey business is off the charts. Conor now has the ability to be very calculated, sit back, and play the game the way he wants to."

Who should Conor McGregor Fight on his return?