Trevon Coley is a well-known American football player. He has been playing in the NFL since 2016 after being picked by the Baltimore Ravens. Coley plays as a Defensive end for his team. Trevon was named in the First Team All-Conference USA in 2015.

Trevon Coley was born on July 13, 1994, in Miami-Dade County, Florida. He is the son of Albert Coley and Myrtle Coley. Trevon has not shared much about his early life and parents. Coley graduated from Miramar High School and enrolled at Florida Atlantic University. Talking about his physical appearance, Trevon stands six feet and one inch tall and weighs 136 kg.

Trevon Coley has an estimated net worth of more than $1 Million. The football player credits most of his net worth to his successful football career. Coley has been playing in the NFL for more than five seasons but has not become successful in making huge money from his contracts. The player is a free agent as of 2022 and played with the Titans in the 2021 season with a base salary of $990,000. 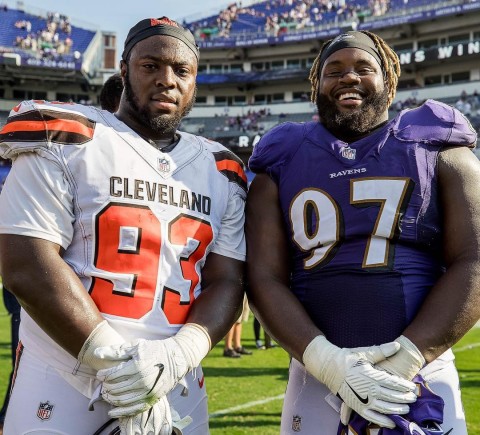 Trevon shares a photo with his friend in the NFL SOURCE: [email protected]_13

Who is Trevon Coley Dating?  Know About His Love Life and Girlfriend

Trevon is pretty private about his relationship status. The football player seems to be single. He is an active social media user and keeps sharing his photos with friends and his games. There is no rumor of him dating anyone in public.

Trevon could be single, dating or even married to his wife and living a happy married life with his family. The player is passing through some tough times with his professional career and must be focusing on his career.

A career in the NFL

Trevon started playing football in Middle school and was part of the High School football tea. He was named Second Team All-State for his senior season in 2011. After graduating from High School, Coley enrolled at Florida Atlantic University. The player appeared in forty-eight games for the team and was a communication major at Florida Atlantic.

Trevon was the team captain and the team's MVP in the 2015 season. The player listed his name for the 2016 NFL draft but was undrafted. The Ravens signed him in May 2016 but were waived shortly. The Redskins signed him in late 2016, and he was later released to the Browns. While with the team, He became a regular member and remained with the team until 2019.

In October 2019, Coley signed with The Colts. He has signed with several teams in the next two-season, including the Cardinals, Jets and Titans. Trevon is a free agent as of 2022.