Tyson Asi Alualu is an American football nose tackle and defensive end who is currently signed to the Pittsburgh Steelers of the National Football League (NFL). He finished his collegiate career at the University of California, Berkeley. He was selected by the Jacksonville Jaguars in the 2010 NFL Draft in the first round.

Honolulu, Hawaii native, Tyson Alualu was born on 12th May 1987, under the star sign Taurus. The thirty-three years holds an American nationality and is of African ethnic background. Further, he stands 6 ft 3 in (1.91 m) and weighs 302 lb (137 kg).

As of 2020, Tyson's net worth is approximately $15 million. Moreover, he owns a million-dollar mansion in Jacksonville, Florida.

Alualu is married to his long-time partner, Desire Pomelo. Before graduating high school, Desire was pregnant with her then-boyfriend now-husband, Tyson's baby. At the time, he had started in California in the summer but returned home before fall semester classes to get married and to see the birth of his first child, Tyree. In January 2006, he returned to California, and later Desire joined him. 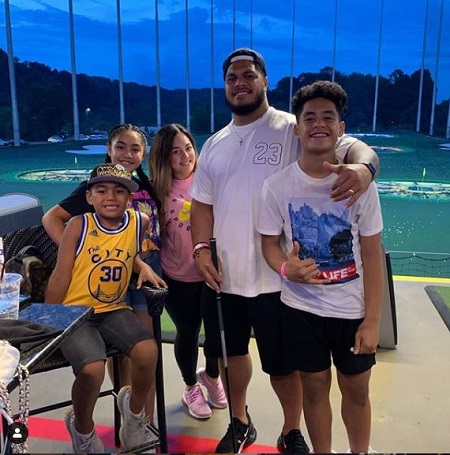 In 2008, Alualu and his wife welcomed their second child, a daughter, Dere'on. Further, they have two more children: Tyson and Tydes: altogether four children.

Tyson Alualu was born on Levaa'i Alualu and Ta'avao Alualu. He was raised with seven sisters and a brother. Their father went in and out of prison in Alualu's youth, convicted multiple times on assault and drug charges.

Alualu attended and graduated from Saint Louis School in Hawaii in 2005, where he recorded 7 sacks and 59 tackles and was named the ILH Player of the Year by the Honolulu Advertiser during his senior year.

Further, he played for the California Golden Bears football program represents the University of California, Berkeley.

At the 2010 NFL Draft, Alualu was selected by the Jacksonville jaguars. On August 2, 2010, Alualu signed a five-year deal with the team and started his rookie season as the starting defensive tackle. He played seven seasons for the Jaguars and then signed to the Pittsburgh Steelers on 21st March 2017. His teammates include Ben Roethlisberger, Bud Dupree, and David DeCastro.