Megan Olivi is an American Sports television personality and sideline reporter specializing in MMA. Currently, she hosts UFC Ultimate Insiders on Fox Sports 1. and has a series on UFC Fight Pass, "The Exchange With Megan Olivia." Besides, she is the wife of UFC Veteran Joseph Benavidez, who currently ranks #5 in the UFC flyweight rankings.

New Jersey native, Megan Olivi was born on 29th August 1986, under the star sign Virgo. The thirty-four years old holds an American nationality and is of Italian descent. She played softball in school and wanted to pursue a career in gymnastics but has to quit due to financial conditions. She enrolled at Seton Hall University. earning a degree in political science. She did her master's in broadcast journalism from Fordham University.

Megan Olivia travels the world covering UFC events. As a host of UFC Ultimate Insider on Fox Sports 1, her annual salary is $100,000 per annum. Further, she adds another buck from a series on UFC Fight Pass, The Exchange With Megan Olivi.

Megan Olivi met Joseph Benavidez in the lobby of Mandalay Bay back in 2009. There she was with her two best friends and Jospeph with some other fighters. She remembers, "We were cute girls, they were cute dudes, and they were like ‘Hey, you want to come to Tryst?’ They end up going to the popular Las Vegas nightclub and that was where Megan and Joseph started talking. 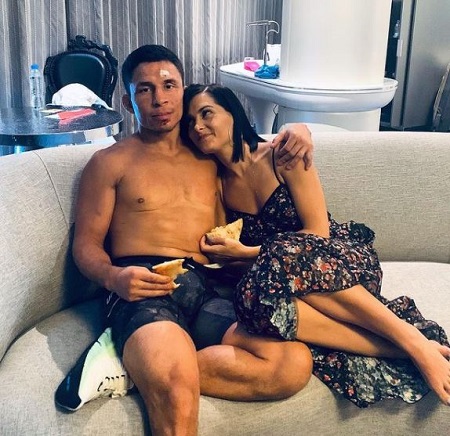 That entire night, the duo spoke to each other and also brought up the popular comedian/actor Will Ferrell. Things slowly grew between them and they started talking more via Skype and on the phone. Though long-distance it did not stop them from continuing their relationship.

In 2014, Benavidez popped the question, The answer was obviously YES! The following year in 2015, they tied the knot and lived a blissful life.

Details About Her Husband

Joseph Benavidez (31st July 1984) is a professional MMA fighter from San Antonio, Texas. He began fighting professionally in 2006 debuting with Universal Fight Promotions. Before signing to the UFC in 2011, he had competed at Border Warz, Warrior Cup, Bring It On, Independent Event, PFC, and WEC. His professional stats show 28 (8 KO)- 8 - 0.

After her master's degree, Olivia accepted an opportunity to cover the sport of MMA in Las Vegas, Nevada. She completely fell with MMA while also continuing to brighten her on-camera skills, most notably co-hosting the live Ultimate Fighting Championship (UFC) Preshow Fight Day.

Then, Olivi worked for Fox Sports covering UFC events and hosting lifestyle segments for FoxSports.com. In February 2013, Olivi was hired as a correspondent for Fox 6 News San Diego to cover the San Diego Padres as a Social Media Reporter. Also, she was hosting and producing a weekly magazine show called “Padres POV” at the time. 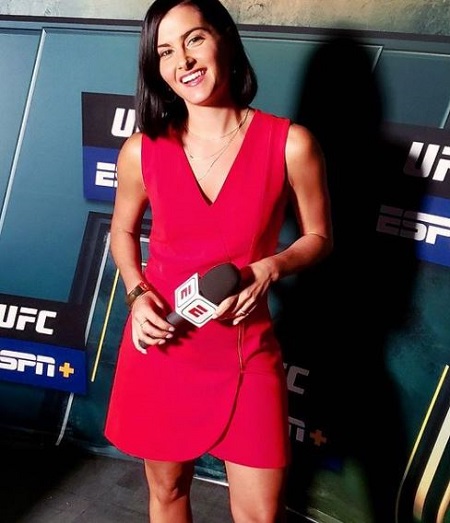 However, Olivi quit her career with the Padres and returned to Las Vegas to pursue reporting with the UFC. Currently, she travels the world covering UFC events, hosting UFC Ultimate Insider on Fox Sports 1. Additionally, she has a series on UFC Fight Pass, The Exchange With Megan Olivi.