In August 2015, Hueng moved to Tottenham for a record fee of £22 million and a five-year contract. He received a salary of £4,420,000 in the first three seasons which increased to £7,280,000.  Besides. the football he earns a decent sum through his endorsement deal with various brands including Adidas, Gatorade, and LG, and has a market value of £125 million as of 2022.

Totaling his career earnings until 2022, Son has earned £55,068,000 as his earnings from eight seasons with Tottenham and will add almost £30 Million in the next three seasons. His teammate, Harry Kane has an annual salary of £10,400,000 until his contract expires in the 2024/25 season.

Talking about his personal life, he has been romantically linked with Yoo So Young who has often seen together.

Their relationship only lasted for a year before, he began dating Bang Min-ah, a South Korean actress and a singer by profession. But have separated due to focusing more on their careers. He is reported to be single as of 2022 and focusing on his career.

He was interested in playing football since his early childhood days and joined the youth clubs of FC Seoul and Hamburger SV.

After playing for the reserve team of Hamburger SV, he joined the main team in 2010 and scored his first league goal against 1 FC Koln on October 30, 2010. He was later transferred to a fellow German football club, Bayer Leverkusen, and signed a five contract for a reported transfer deal worth €10 million in the summer of 2013. 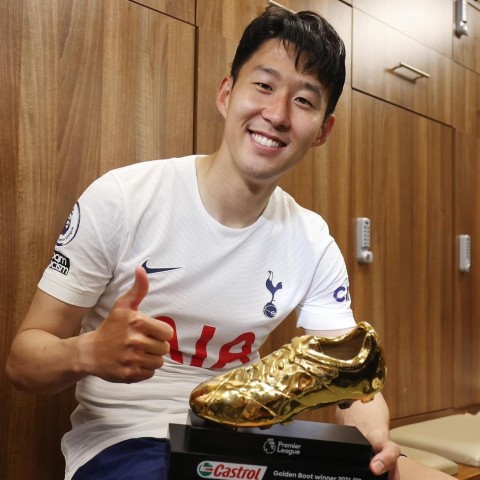 Son scored a hattrick against a former club Hamburgers SV on 9 November 2013. He later signed with English Premier club, Tottenham Hotspur for £22 million as a transfer fee amount in 2015. Son made his debut against Sunderland on 13 September 2015 and scored his first Premier League goal against Crystal Palace on September 20, 2015.

Son has been part of several top moments with the club, In his six seasons with the club, The player has appeared in almost 250  games and scored 93 goals. In 2019, he became the second Asian in history to reach and start a UEFA Champions League final. In the 2021/22 season, Hueng won the golden boot along with Mohamed Salah.

After having represented South Korea at the U 17 FIFA World Cup 2009 in Nigeria and made his full international debut for South Korea against Syria on 30 December 2010 and scored his first international goal against India during the 2011 AFC Asian Cup.

He has played for South Korea in tournaments like AFC Asian Cups and the 2014 FIFA World Cup as well as the 2016 Summer Olympics.

The South Korean winger along with strikers such as Kim Shin-Wook and Hwang Hee-chan is included in the 23 men South Korean squad led by Ki Sung Yueng at the 2018 FIFA World Cup held in Russia.

Son was spared from the 21 months of compulsory military service after South Korea won the gold medal in Asian Games defeating Japan by 2-1. The government had offered exemptions to the players who win the gold medal at the Asian Games or a medal of any color at the Olympics.