Shelvin Mack is an American professional Basketball player who plays in the National Basketball Association (NBA). As of 2018, Shelvin Bernard Mack Jr currently plays for the Memphis Grizzlies as their Point guard / Shooting guard. He has played for other teams like Atlanta Hawks, Utah Jazz, and Orlando Magic.

As a Point guard / Shooting guard, Shelvin Bernard Mack Jr reportedly earns around $2,029,463 as his yearly salary from Memphis GrizzliesFurther, Shelvin has an estimated net worth of over $10 million. He is married to his wife Candyce Brown and has a daughter with her.

Shelvin Bernard Mack Jr was born on April 22, 1990, in Lexington, Kentucky to parents Shelvin Mack Sr and Victoria Guy. As per his nationality, he is American and belongs to African ethnic group. Further, his star sign is Taurus.

In addition, the details about his siblings are not available yet.

Shelvin Mack Net Worth And Salary

On June 23, 2011, Mack was selected by the Washington Wizards with the 34th overall pick in the 2011 NBA draft. He signed with the Wizards on 9 December 2011 after the NBA lockout was completed.

Mack joined the Washington Wizards in July 2012 for the NBA Summer League. Later, He was waived by the Wizards on October 28, 2012.

On November 2, the Maine Red Claws selected him with the fourth overall pick in the 2012 NBA Development League draft. Later in his career, he also played for the clubs like Atlanta Hawks and Utah Jazz.

Some of his career stats while playing for Atlanta Hawks and Utah Jazz are:

Currently, he is associated with Memphis Grizzlies playing along with MarShon Brooks, Wayne Selden, Dillon Brooks and many more.

Shelvin Mack is married to his girlfriend Candyce Brown. The couple had been in a relationship for last six years before tying the knots on June 23, 2018. The couple is also blessed with a daughter named Zuri.

Moreover, his wife Candyce is also a former basketball player who played for the school team of Butler. 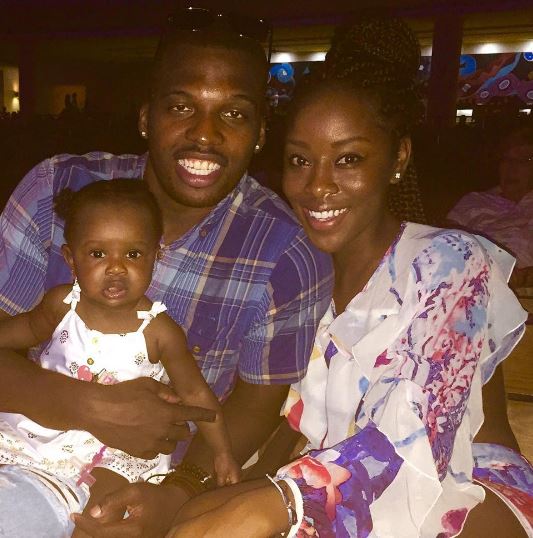 CAPTION: Shelvin Mack with his daughter and girlfriend SOURCE: fabwags

The Famous NBA star is 6 feet 3 inch in height and weighs around 92 kg.

Other than being a famous NBA Point guard / Shooting guard, Shelvin Bernard Mack Jr is pretty famous in social media, having 33.3k followers on Instagram and 25.8k followers on Twitter.