Wayne Selden is an American professional basketball player. He currently plays for the Chicago Bulls of the National Basketball Association (NBA). Selden played college basketball for the University of Kansas and was also the member of Iowa Energy and New Orleans Pelicans. Moreover, he also competed at the 2015 World University Games for the United States.

Wayne Selden Net worth and Salary

As of 2019, the estimated net worth fo Selden is around $2 million. He currently plays for the Chicago Bulls. Furthermore, the NBA rooster currently has an annual salary of $1,544,951.

Moreover, Selden previously played for the Iowa Energy and New Orleans Pelicans. Similarly, Selden must have earned a good sum of money from his college basketball career. Besides this, he further adds money from his National Basketball team career.

Wayne Selden most often keeps his personal details away from the public. Nevertheless, Selden is not married yet and further he is not dating anyone. Likewise, there are no records of Selden's past relationships and affairs.

Selden is active in social media including Twitter and Instagram but so far, he hasn't shared the photos of girls which make people feel doubt about his relationships.

As Selden is not married and is not dating anyone, his sexual orientation is straight. Rather than being involved in any kind of personal stuff, Selden might be focusing on his career.

Wayne Selden was born on 30th September 1994, in Roxbury, Boston, Massachusetts, United States. His parents are mother Lavette Pitts and father Wayne Selden, Sr. He grew up along with his siblings, brother Taylor Guarino-Selden and sister Anthony Selden. 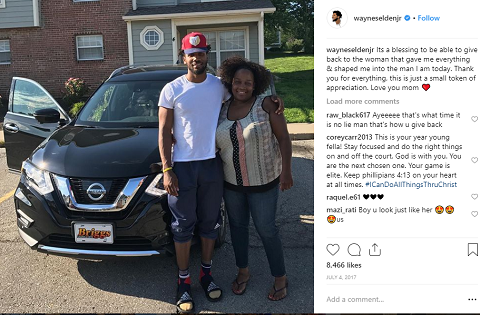 Selden attended John D. O'Bryant School of Mathematics & Science and later transferred to Tilton School. He graduated from the University of Kansas.

Wayne Selden averaged 24.8 points, 10.1 rebounds, and four assists during his senior years at high school. In McDonald’s All-American game, Selden was the East team’s second-leading scorer. Upon his graduation, he was considered as the five-star player. Selden was further ranked No. 14 on the ESPN 100 and No. 12 by Rivals.com.

Selden remained undrafted in the 2016 NBA draft so he signed for Memphis Grizzlies but got waived just after two months.

Later, Selden played for Iowa Energy of the NBA Development League. Selden signed a 10-day contract with New Orleans Pelicans on 8th March 2017. Moreover, he signed a two-year contract with Memphis Grizzlies on 18th March 2017 and re-signed the contract on 1st July. Besides this, Selden is also a member of the National basketball team.

On January 3, 2019, Selden was traded to the Chicago Bulls along with MarShon Brooks and the Grizzlies' 2019 and 2020 second-round picks, in exchange for Justin Holiday.