Ruslan Malinovskyi (fully Ruslan Volodymyrovych Malinovskyi) is a Ukrainian professional football player who plays as a midfielder for an Italian club, Atalanta, and internationally for the Ukraine national team. An attacking midfielder, Malinovskyi is noted for his powerful and accurate shot with either foot.

Malinovskyi was born in Zhytomyr, Ukraine on May 4, 1993. He began his training with Polissya Zhytomyr, his birth city club. After being with them for five years, Malinovskyi moved to the youth team of Shakhtar Donetsk, one of Ukraine's most popular football clubs.

Malinovskyi was promoted to Donetsk's first team in 2011 but was loaned to several clubs without single appearances. From 2011 to 2012, he sported the shirt of Shaktar's division three team in their 39 matches scoring 10 goals. He then signed with a fellow Ukrainian team, Sevastopol in 2012.

Before moving to their B side, he played in their 16 competitive matches whilst finding the back of the net on one incident. With Sevastopol's second-division squad, he made two appearances and one goal after which he was loaned to yet another Ukrainian group, Zorya Luhansk.

During his one-year stint in Luhansk, Malinovskyi emerged in 44 of their total games netting himself 7 goals. In January 2015, he was sent to a Belgian team, Genk for whom he made combined 107 appearances and 23 goals. He has been with the Italian team, Atalanta since 2019 scoring 16 goals in 70 featuring.

Malinovskyi has been on the national team since 2015 and as of June 2021, has represented Ukraine on 38 official matches beating the goalkeepers on a total of six occasions.

To date, his honors include Ukrainian Premier League Young Player of the Year (2013-14), Genk Player of the Season (2018-19), Serie A MVP of the Month, and Serie A Top Assist Maker.

How much is Ruslan Malinovskyi Net Worth and Salary?

Malinovskyi is a millionaire footballer with his salary allegedly hitting over $1.3 million annually. His career earnings have been reported grossing beyond $6 million - noting from his Sevastopol days.

Playing for their youth team in 2013-14, he has been recorded to have received a wage equivalent to around $9000. It wasn't until his move to Ukraine (Shakhtar Donetsk) when he started to make a standard salary.

From his first season with the Miners, he reportedly made $30,000, here and there. By the closure of the next season, he had made a little over $550,000, or so tells several reports. 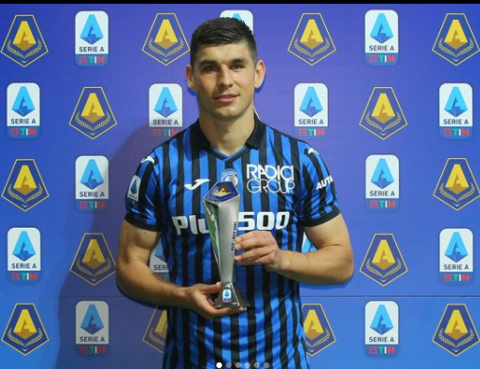 During his final stay at Donetsk, he pocketed a combined $630,000 and change - exclusively in the form of salaries. Stats also show the two seasons with Genk had seen him generating close to $2 million with his weekly pay rising from $12,000 to as much as 25,000.

Since 2020, the Goddess has paid him a salary significant to $2 million; more or less. In light of the above-mentioned details, experts project Malinovskyi's net worth could very much lie in the ballpark of $2 - $3 million.

The five-foot-eleven playmaker is married to Roksana Malinovskaua. They began their romantic journey in March 2013. The pair, however, was first believed to have started dating in November.

On the 4th day of that month, Malinovskyi, through his Instagram, had introduced what now appears to be his future wife. Sharing a picture of himself and Roksana, the Ukrainian footballer wrote, "Such Pretty." Viewers, while in suspicion, couldn't deduce as to what sort of bond he had actually had with the then mysterious blondie - since Malinovskyi withheld himself from referring the featured lady as her girlfriend and such. 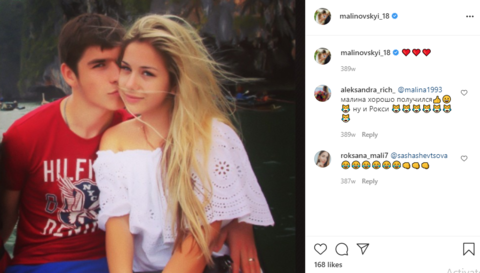 A month later, Roksana made yet another appearance on Malinovskyi's Instagram, only this time the midfielder's three red hearts tagged alongside the picture gave followers a rock-hard confirmation regarding his love for Roksana. 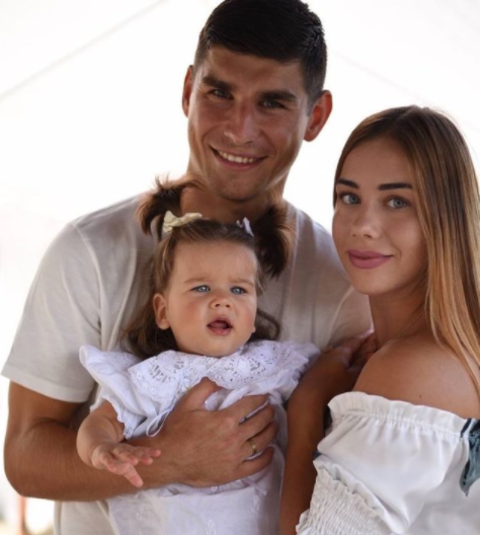 Over the following Insta activities, the duo, via each of their handles, kept on celebrating their relationship with multiple anniversaries, engagement, marriage, as well as the birth of their first child.

Malinovskyi and Roksana had their wedding in September 2016 in Prague, Czech Republic. They welcomed their daughter, Olivia on November 13, 2019.