Robson Concicao was born Robson Donato Conceicao on October 25, 1988 in Salvador, Bahia, Brazil. He is the only child born to Marcia Donato and her husband. Robson grew up along with his mother and granny. Conceicao did not get any formal education and spend his early days training most of the time. Talking about his physical appearance, Conceicao stands five feet and seven inches tall and weighs 57 kg.

Robson started boxing at the age of 13 to stand his own in street fights. He competed in numerous amateur events in his hometown and came to recognition in 2008, fighting for the qualifiers for the 2008 Summer Olympics. Conceicao won all the qualifying matches to earn his spot for the Olympics. He eventually lost his opening match to Li Yang.

In 2009, Robson lost in the first round at the 2009 World Amateur Boxing Championships. After training for two years, He won two bouts but lost in the mid-way to the finals. Shortly after that, Conceicao represented brazil in the Pan American Games and won a Silver medal for the nation in the Lightweight division. He was among the best boxer to represent in the 2012 Summer Olympics but lost his first match.

After the 2012 Olympics exit, Robson thought of going professional instead of the joined Brazilian Navy and worked for the team. In 2013, Conceicao won the Silver medal at the 2013 World Championships held in Almaty. In 2015, He won a bronze medal at the World championships under the lightweight division. 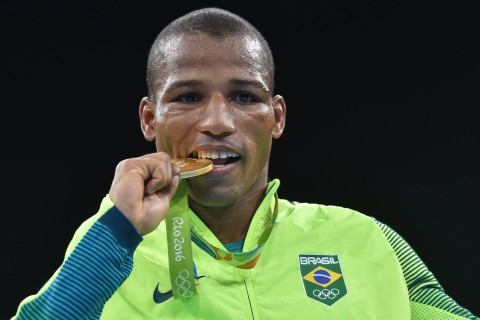 Robson posses for a photo after the winning gold medal SOURCE: Getty Images

Robson was part of the 2016 Olympics team. He became the first Brazilian boxer to win an Olympic gold medal after winning his matches against Lazaro Alvarez, Sofiane Oumiha. He ended his amateur career with a record of 405–15

Robson signed with Top Rank, made his professional debut in 2016 against Clay Burns, and won via Unanimous decisions. In the following year, Conceicao fought in four matches and won all of them. In 2018, He won all of his five games. Robson played his last professional game in April 2021 against Jesus Antonio Ahumada and won the match via TKO. Conceicao is set to face Oscar Valdez for a title match.

Who is Robson Conceicao Married To? Know About His Married Life and Children

Robson is married to his longtime girlfriend, Erica Matos. Conceicao proposed to his girlfriend during Pan American Games in 2013. Shortly after that, They got married in a private wedding ceremony. In 2014, The duo welcomed their only child, a daughter, Sophia. The family of three is living a happy married life.

Robson Conceicao has an estimated net worth of more than $500,000. He has accumulated most of his net worth through his successful career in boxing. Conceicao must have received a handsome amount for representing his nation in numerous international events.