Richard John Hatton was a British professional boxer until the year 2012 and since then working as a promoter and trainer in the same field. During his fighting career, he competed in the Light-welterweight where he won multiple championships and one at welterweight. He had a boxing record of 45-3-0 (win-loss-draw). He was undefeated until his 43 fights and finally lost to Floyd Mayweather Jr. in his 44th bout.

Ricky Hatton Net worth in 2020: What are his sources of income now?

The fighting tycoon has earned a major portion of his fortune from his boxing career. Although his earnings aren't revealed in any media, he has made some impressive cash from his matches. According to reports from Tsmplug, he made about $12 million from his matchup against Floyd Mayweather Jr. even though he lost, he received his TV rights deals from Uk and his guaranteed earnings.

The pro boxer had also received sponsorship deals and endorsement deals during his boxing career that add value to his net worth. Through all of his career earnings and deals, his estimated net worth is $50 million. 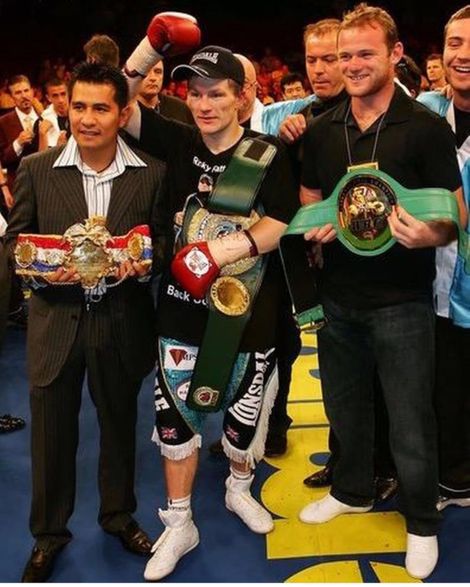 In addition to his professional career, he currently works as the promoter and trainer in the boxing industry. He has his own promotion company namely Hatton Promotions. The company oversees the fights of boxers such as Anthony Upton, Sonny Upton, Lucas Browne and many more. Zhanat Zhakiyanov became the first fighter under the Hatton Promotion to become the first world champion when he defeated Rau'shee Warren to win the World Boxing Association bantamweight title.

Ricky Hatton Wife and Son: who is the mother of his Son?

The 5' 7'' tall is a single dad who lives with his two daughters. They are Millie Hatton and Fearne Hatton. Hatton was previously living with his girlfriend Jennifer Dooley, the mother of Millie and Fearne in their house the "Heartbreak Hotel", named after his favorite artist Elvis. The information regarding their marriage is yet to be revealed in the media.

Prior to his relationship with Jennifer, he had a relationship with Charlie Nordell. Together they have a son named Campbell from their relationship. Ricky has set up a trust fund for his child to make sure that he is provided for. He meets with him whenever he has time. 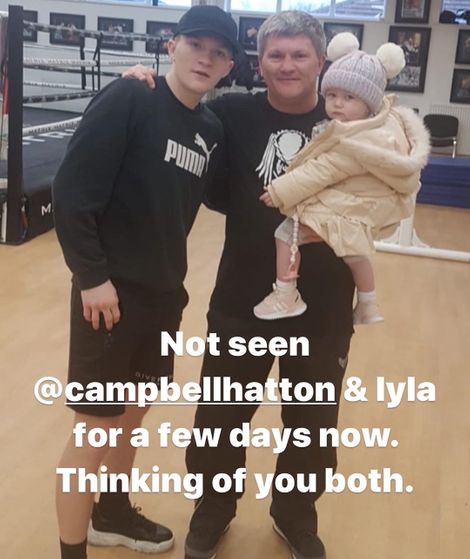 Ricky Hatton with his son and granddaughter SOURCE: [email protected]

In a recent post, he has shared that he misses him and his granddaughter Lyla.

The 84 Kg Hatton is currently working with two boxers. One of them is Nathan Gorman, the nephew of Bartley Gorman king of Gipsies, Zhanat Zhakiyanov as well as Irish champion Paul Upton.

Alongside Nathan, he also trains Tommy Fury, the younger brother of Tyson Fury. Ricky was present for the Tyson Fury comeback fight in 2018 against Deontay.

The Boxrec has ranked Hatton as the best Britsh light-welterweight of all time, the third-best in Europe, and eleventh best in the whole world.

According to his profile, he has won a total of bouts in his fighting career and has lost to three fighters who are Vyacheslav Senchenko, Manny Pacquiao, and Floyd Mayweather Jr.

After retiring from boxing in 2012, he battled from drinking and drug problems and also had depression.

The Lightweight champion was born in Stockport and was raised in Hattersley council estate in Hyde, Greater Manchester. he attended Hattersley High School. He found a local boxing club in Hyde to train.

In 14 years of age, he was taken by his uncles Ged and Paul to Manchester United's Old Trafford stadium to watch the second fight between Nigel Benn and Chris Eubank. which spiked his interest in boxing. His entrance music was the Manchester City club song "Blue Moon" as performed by the band Supra.