Richard Julian Porte is better known as Richie Porte is an Australian professional road bicycle racer who has won 2X Paris-Nice. Currently, he is riding for UCI WorldTeam Ineos Grenadiers.

Thirteen years as a professional cyclist has earned a tremendous amount. The significant source of his earning is prize money. Though there is no exact detail on how much he summoned in prize money, looking at his trophies, his career earning is no less than $2 million in cash.

As of 2021, his net worth is approximately $2 million. No doubt, he is living a lavish lifestyle but has maintained it lowkey.

Richie Porte is married to Gemma Nicole Porte. His wife is from Manchester. The couple met when Porte  was at Team Sky between 2012 and 2016. 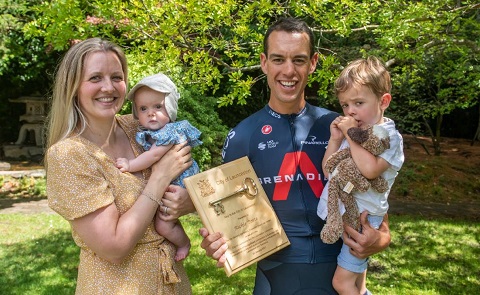 Richie Porte with his wife and children SOURCE: The examiner

The couple tied the knot in 2015. Porte has two children, after the birth of his son Luca in 2018. His second child is daughter, Eloise.

For the 2012 season, Porte joined the Team Sky where he prominently made an impact, winning the Volta ao Algarve.

In the following years, Porte achieved his greatest win to date, acquiring two stages and the overall classification in Paris–Nice. Moreover, he was as a super-domestique for three Team Sky Tour de France victories: Bradley Wiggins in 2012 and Chris Froome in 2013 and 2015.

In 2015, he won the Australian National Time Trial Championships. That same he won two stages and the final overall classification of Paris–Nice, winning that race for the second time in three years and ending up atop the UCI world road cycling rankings.