Besides, Manaj has gained broad experience as he has already played for multiple clubs before coming to Watford. Manaj wears jersey number 9 in his current club. Being a professional footballer, Manaj has been able to preserve a decent fortune. Also, Manaj makes money from brand endorsement and sponsorship deals.

Watford footballer Rey Manaj makes a good amount of money from being a professional footballer. He is currently signed with Watford. His net worth may be around $300,000. Playing for Watford, Manaj earns £11,000 as his weekly salary and £572,000 in a year. 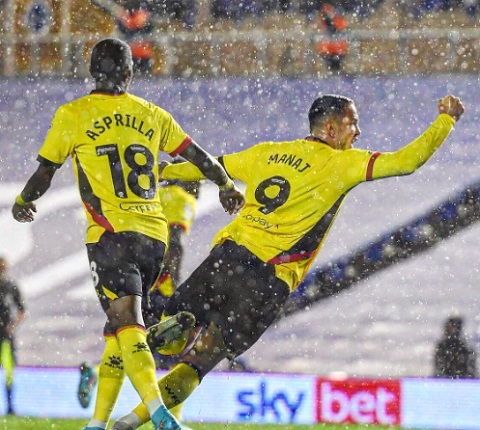 As said earlier, Manaj has also played for other teams in the past with whom he had fair deals. His deal with Barcelona B was €2 million, and before that, he was a part of the Albacete team. His agreement with Albacete was in the same range. As of now, Manaj has earned over €5.30 million from being a footballer.

His current market value is €1.50 million. Manaj lives a luxurious life as he has added a considerable fortune under his name.

Looking at his social media posts of Manaj, it seems like he is not engaged in any romantic affairs. So, Manaj does not have a girlfriend or a wife. The professional footballer has never made a single post about his love life on his Instagram. This also makes it clear that he is a private guy, just like Keidi Bare.

Like many other Albanian footballers, Manaj may be prioritizing his career at the moment. As his well-wishers are concerned about his love life, Manaj may give some happy news in the future. So, to get updated on his life, we can follow Manaj on Instagram as @reymanaj97.

Manaj was passionate about playing football from a young age. So, his career began just at the age of 11. In 2008, he joined the youth system of Piacenza and remained at the club until 2012. For the next two years, Manaj played at Cremonese. After that, he was loaned to Sampdoria.

In the 2014-15 season, Manaj scored two goals in 22 games while playing for Cremonese. On July 2015, he signed a professional deal with Inter Milan. Andre Onana is another footballer who plays for Inter Milan. With Inter Milan, Manaj just played in 4 games. From 2016 to 2018, he played on loan with different teams, including Pescara, Pisa, and Granada. From 2018 to 2020, Manaj played for Albacete. In total, he appeared in 37 games and also scored nine goals. For the 2021-22 season, Manaj was in Barcelona's leading team but didn't make a single game appearance. After that, he was loaned to Spezia and netted five goals in 30 games. On July 12, 2022, Manaj moved to the Championship club, Watford.

Talking about his career at the national team, Manaj debuted for the senior squad of Albania in 2015.

Rey Manaj was born to his parents on February 24, 1997, in Lushnje, Albania. Later, Manaj moved to Italy with his parents. As of now, Manaj has not given much info about his family background, due to which his father's and mother's name remains unknown.

Besides, Manaj holds Albanian nationality and his height measurement is 6 feet.