Nadiem Amiri is a rising German professional football player. He is currently playing in the Italian Football League, Seria A club, Genoa. Amiri plays as an attacking midfielder for his club and country. Nadiem turned professional in 2014 and started his career with 1989 Hoffenheim.

Nadiem Amiri was born on October 27, 1996, in Ludwigshafen, Germany. He is among the two children born to Nazir Amiri and Najla Amiri. Nadiem has an older brother Nauwid Amiri, also a football player. Amiri stands five feet and eleven inches tall and weighs 77 kg.

Nadiem Amiri has an estimated net worth of more than $5 Million. He has earned most of his net worth as his salary with the club. Amiri must be making a handsome amount from his sponsorship and advertising deals. The German football player is very private about his economic career. Nadiem has an annual salary of €3.6 Million with Leverkusen. Nadiem signed with Leverkusen in 2019 until 2024 SOURCE: [email protected]

Amiri is loaned to Genoa and has not shared the contract details. In mid-2019, He signed a five-year deal with Leverkusen. Nadiem is very early in his career and will add a huge net worth in the future. While representing Hoffenheim senior team, The player had an annual salary of £1,300,000.

Who is Nadiem Amiri Dating? Know About His Girlfriend

Nadiem is dating his longtime girlfriend, Nele Kracht. The love birds have been together for some time. They have not shared a word about their first meeting experience. Amiri first posted a photo of the couple in early 2021. They are active social media users and keep sharing photos in their timelines. 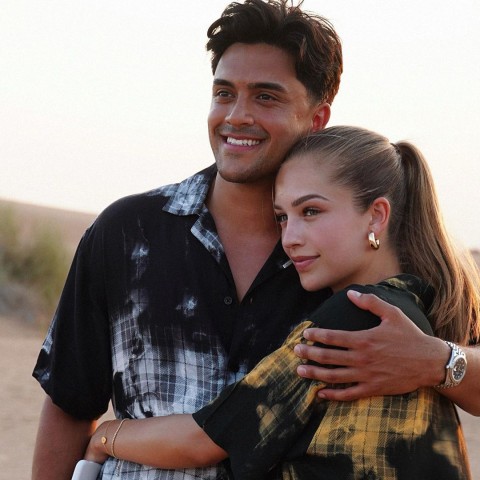 In June 2021, Nadiem and Nele went on a vacation in Dubai. They had a good time with each other. Kracht is a model and has a pretty good fan following her Instagram profile. The love birds are yet to get engaged or tie their wedding knot.

Nadiem started training with his hometown club, Ludwigshadener's youth team, in the early days. He moved to different clubs until being stable with 1899 Hoffenheim in 2012. Amiri played for the 1899 Hoffenheim II team for a season in 20414 and earned his senior team call in 2015. Nadiem made his professional Bundesliga debut against VfL Wolfsburg in February 2015.

Nadiem remained signed a two-year contract with the club. He remained an integral player for the club's success. The player extended his contract until 2020. In his five seasons with the club, Amiri appeared in 106 games and scored eleven goals for the team. In mid-2019, Nadiem signed a five-year contract with Bayer Leverkusen for an undisclosed fee. In the next two seasons, He appeared in seventy-two games. For the 2022 season, Amiri is loaned to Genoa for a season.