Remco Evenepoel is a Belgian cyclist who is currently signed to the UCI WorldTeam Deceuninck-Quick-Step. His major wins include 2X Tour of Belgium (2019,2021), Volta ao Algarve, Vuelta a Burgos, Vuelta a San Juan, Tour de Pologne all in 2020, and Danmark Rundt in 2021.

Aalst, Belgium native, Remco Evenepole was born on 25th January 2000, under the star sign Aquarius. He is the son of the retired Belgian racing cyclist, Patrick Evenepoel, who rode his only Grand Tour the Vuelta a Espana in 1993, finishing at 113th. Now you know from where Remco's cycling skill coming from.

How Much Is Remco Evenepole's Net Worth In 2021?

Remco Evenepoel agreed on a deal extension with Deceuninck-Quick-Step that will see him stay with the Belgian team until the end of 2023. Though the financial detail from the team is yet to come out to the media, Remco is believed to make no less than $0.3 million per annum.

Besides, he collaborated with ZEB.be, a multi-brand fashion store. As of 2021, his net worth is $0.5 million.

Remco Evenepole is in a relationship with Oumaama Rayane for a long time now. Often present at the foot of the official podium during the victories of Evenepole, very active on Instagram with more than 23,000 subscribers, Rayane is a student in economics in Brussels, does not seek the limelight. 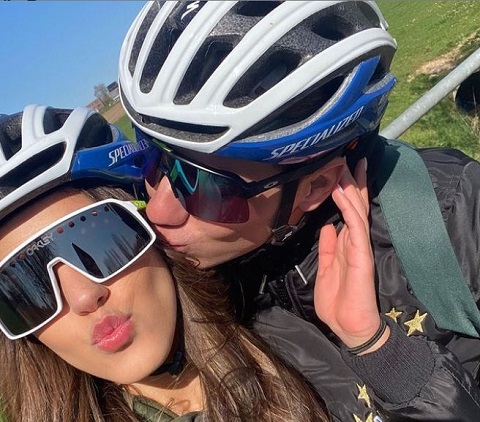 Rayane's never left a stone unturned to support his man. She wrote, "We’re going to get through this together, in good and bad days."

Remco Evenepoel started his sporting career as a football player. At the age of five, he joined Anderlecht. When he turned eleven years old he switched to the youth academy of PSV Eindhoven returning to Anderlecht again at the age of fourteen.

Following some setbacks and disappointments, Evenepoel switched to cycling in 2017.

In July 2018, Evenepoel announced that he would join Deceuninck–Quick-Step for the 2019 season. For his debut season, he was scheduled to compete in shorter stage races and skipped the cobbled, one-day Classic races.

He made his debut at 2019  Vuelta a San Juan, where he won the young rider classification and 9th overall whilst also winning his first professional podium in the stage 3 time trial behind teammate Julian Alaphilippe and Valerio Conti. He tasted his first to win at the Tour of Belgium.

Evenepoel began the 2020 season at the Vuelta a San Juan, where he won the individual time trial on stage 3 and the general classification. He then competed at the Volta ao Algarve, winning stage 2 and the final stage, a time trial, to clinch overall victory ahead of Maximilian Schachmann.

After the  COVID-19 pandemic break, he won the Vuelta a Burgos and the Tour de Pologne.

He started 2021 at the Giro d'Italia, finishing 7th in the prologue time trial.