A Spanish basketball player Pau Gasol Saez is simply known as Pau Gasol who currently plays for the Milwaukee Bucks of the National Basketball Association (NBA). He was selected with 3rd overall pick in the round one of the 2001 NBA draft by the Atlanta Hawks.

Gasol who is a six-time NBA All-Star and a four-time All-NBA selection currently has an estimated net worth of $65 million. Neither married nor single, he is currently dating her long-time girlfriend, Catherine McDonnell.

Pau Gasol Net Worth and Endorsement

While playing for San Antonio Spurs, he had an annual salary of $7.449 million.

His significant source of income is his professional basketball career. Besides, he adds a good worth to his net worth through his endorsing deal with various renowned brands including Nike.

Pau Gasol owns a house in Barcelona, Spain. He has a list of the world's best luxury cars. As per riding, he prefers Audi A8.

38, Pau Gasol had been in a relationship with Serbian Model Bojana Barovic. The two started dating in 2005; however, the couple separated after 3 years and went their own ways. Then in September of 2009, he began dating Spanish Cheerleader Silva Lopez Castro. The couple first spotted together in the NBA All-Sta Weekend in the L.A Sports Awards where Pau received the L.A Sports Award of the Year.

The lovely couple soon moved to Pau’s apartment in Manhattan Beach in California. Nonetheless, Gasol found out Silvia cheated on him with Shannon Brown, husband of R&B singer Monica.

In March 2014, the couple broke up. Before Gasol started dating Lopez Castro, it was rumored he dated Serbian personality Poilanka and Chris Hemsworth’s spouse Elsa Pataki.

Gasol took some time alone after his tragic separation with his girlfriend. It nearly took 2 years to open his heart once again and this time he is romantically involved with Catherine McDonnell. The couple got married in July 2019. They first wed in California and again held their wedding ceremony in Spain after a week. 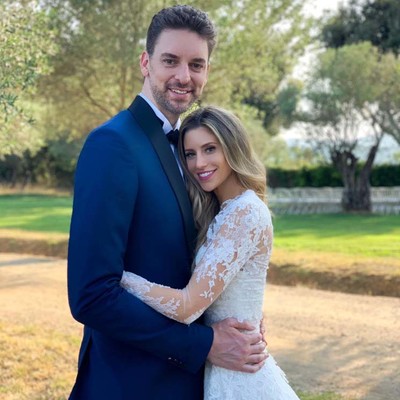 His wife, McDonnell is a vice president of Guggenheim Partners and previously was a sports broadcasting reporter for Fox Television and ABC News.

Pau Gasol was born on 6th of July 1980, at Sant Pau Hospital in Barcelona, Spain. At the very time, his mother Maris was a medical doctor whereas his father was a nurse administrator in the same hospital where Gasol was born.

At 6, Gasol along with his family moved to the Memphis suburb of Germantown, Sant Boi de Llobregat, where he spent the remainder of his childhood along with his siblings Adria and Marc.

He initially did not want to pursue his career in sports rather he wanted to be a doctor and find a cure for AIDS. So, he attended a medical school at the University of Barcelona but left as his basketball career at FC Barcelona advanced.

Nonetheless, he had a keen interest in football but loved basketball. The very first sport he played was rugby, prior to switching to basketball.

Regarding his nationality, Gasol is Spanish and belongs to white ethnicity. His birth sign is Cancer. He believes in Roman Catholicism.

At 16, Pau Gasol started playing for Barcelona’s junior team. In his junior season, he won the both “1998 FIBA Europa U-18 Championship” and “1998 Albert Schweitzer Tournament”. After he was promoted up to the senior team of Barcelona, Gasol only played 25 total minutes in the Spanish ACB League’s 1998-99 season where he recorded 13.7 minutes per game in the ACB the next year.

In 2001, Barcelona was triumphant in the Spanish National Cup final championship where he was also named “Most Valuable Player”.

Following his entering the NBA Draft, Gasol was picked overall third in at the first round in the “2001 NBA draft” by the Atlanta Hawks.  Later Hawks traded his draft right to the Memphis Grizzlies in exchange for Shareef Abdur-Rahim.

In the first season with Grizzlies, Pau Gasol became the first-ever foreign player to win the “NBA Rookie of the Year Award” as well as named to the “NBA All-Rookie First Team”. He played in all 82 games, averaging 17.6 points and 8.9 rebounds per game in that season.

He played a total of 8 seasons for Memphis Grizzlies, winning “2002 Rookie of the Year” being one of only 3 non-American NBA players to win that award.

On 1st February 2008, Pau Gasol was transferred to the Los Angeles Lakers with a 2010 2nd round draft pick for Aaron McKie, Javaris Crittenton, Kwame Brown, and Marc Gasol.

On 5th February, Gasol made his Lakers debut against New Jersey Nets, where he averaged 24 points and 12 rebounds in a 105-90 victory. Further, in the Lakers’ opening game of the playoffs, Gasol recorded 36 points along with 16 rebounds, 8 assists, and 3 blocked shots. On 2nd January 2009, in a victory over Utah Jazz, he scored his 10,000th career points.

In the final year of Gasol’s contract, he was owed $19.3 million, which would cost the Lakers around $50 million including luxury taxes. He became a free agent following the season. He played overall 6 seasons for Los Angeles Lakers, winning two NBA championships.

In 2nd April, Gasol became the 38th NBA player to reach 10,000 career rebounds in a defeat to the Detroit Pistons.

On 14th July 2016, Gasol joined the San Antonio Spurs. On 11th November, he had a season-high with 21 points and 6 assists in a 96-86 victory against the Detroit Pistons.

Following his left ring finger serious injury, Gasol underwent surgery to repair a fracture of his left 4th metacarpal. On 12th April 2017, he became the second European player to reach the mark after Dirk Nowitzki in a 101-97 regular-season finale loss to the Utah Jazz, where he scored 13 points to reach 20,000 career points.

On March 3, 2019, Gasol penned a one year contract with the Milwaukee Bucks. Upon arrival, he joined the team alongside, Isaiah Canaan and Eric Bledsoe.

Pau Gasol has represented his national side in both junior and senior level, playing in several tournaments. He made his international debut with the senior Spain national basketball team in the “2001 EuroBasket tournament’.

Gasol has much success with the Spanish team, winning silver medals at 2003 and 2007 EuroBasket, as well as the 2008 and 2012 Olympic Games. He was also Spain’s flag bearer at the opening ceremony of the “2012 Summer Olympics” and the highest-scoring player of the “2004 Summer Olympics”.

In 2014, Gasol was selected to the All-tournament team of the “2014 FIBA Basketball World Cup”. The following year, he was named the MVP of the competition, following some marvelous performances, scoring 25.6 points and 8.8 rebounds per game.

On 7th September 2017, he became FIBA Eurobasket’s all-time leading scorer in a game against Hungary, passing Tony Marker with 1,033 points.

You may explore more: John Collins