Dirk Werner Nowitzki better known as Dirk Nowitzki is a German retired professional basketball player who last played for Dallas Mavericks of the National Basketball Association (NBA) as a power forward with the jersey number of 41. Prior to that, he has also played for the DJK Wurzburg from 1994 to 1998.

Nowitzki is one of the prominent figures in the basketball world. He had become NBA all-star for thirteen times, BBL Most valuable player, Mister Europa player of the year, and so on.

Dirk Nowitzki Net worth and Salary; What are his Endorsement Deals?

Nowitzki is a multi-millionaire player with an estimated net worth of $170 million as of 2019. From his entire NBA career, he has earned a hefty amount of $251,646,362 as salary playing 21 seasons long.

He endorses several brands like Nike, ING-DiBa, etc. He receives around $500,000 every year as per the contract.

Dirk Nowitzki has an amazing personality in the basketball world. He stands at a height of 7 feet and weighs 111 kg.

Dirk Nowitzki, an NBA All-Star player has established an amazing figure in the history of basketball. Moving into his personal life, he got married to his wife Jessica Olsson in 2012. His wife Olsson is a Swedish. The couple met each other at a charity event for the Sports for Education and Economic Development (SEED) Project in February 2010. 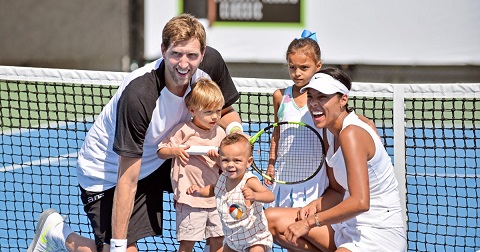 The couple dated for 2 years and tied the knot in the traditional African Wedding style. The couple has three children; two sons and daughter named Malaika Nowitzki, Max Nowitzki, and Morris Nowitzki. They are living a happy life together and there is no sign of getting a divorce.

Going through his dating history, Nowitzki was found to have an affair with his ex-girlfriend, Cristal Taylor. When they were in the relationship, Cristal became pregnant with his child. Nevertheless, it is still a mystery that whether Cristal gave birth to her child or not.

Nowitzki was born on June 19, 1978, in Wurzburg, West Germany. He belongs to German nationality and white ethnicity. According to his birth date, his zodiac sign is Gemini.

Dirk Nowitzki was raised by the athlete's family. Firstly, he played handball and tennis in his hometown but he got tired of being called “freak” as he was very tall among his mates.

After playing 4 years at DJK, Nowitzki got selected with the ninth pick in the 1998 NBA draft by Milwaukee Bucks. However, he was immediately transferred to the Mavericks Dallas and became the greatest power forwards of all time. He is still playing for the club and has won several titles in the NBA tournament along with NBA All-Star Jason Kidd, Deron Williams, Harrison Barnes, and Andrew Bogut.

Besides the NBA career, Nowitzki has played an international game for Germany. He joined the team in 1997 and debuted in the international career in the euro Basketball in 1999. He has played with his country for seventeen years.

Throughout his career, Nowitzki has led his national team to victory several times. Some of the titles that he achieved during his international career are FIBA World Championship, 2 Euro Basket Championship, and so on.