Is the Lionel Messi Highest Paid Football Player? His Net Worth, Properties, and Endorsements 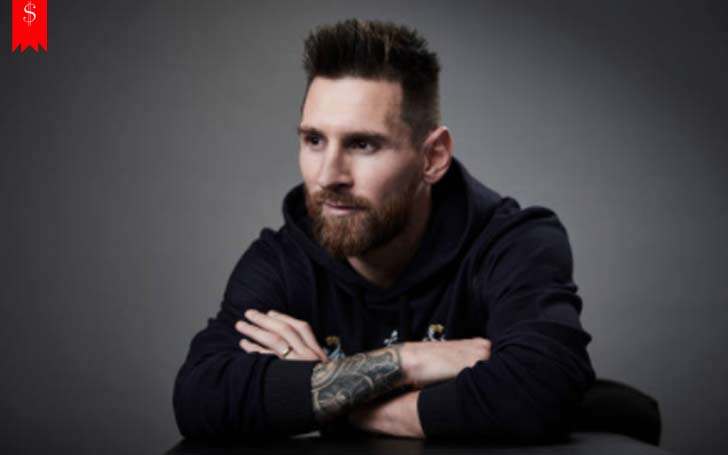 Lionel Messi, the ace of the Spanish team Barcelona and the Argentina National Team plays as a forward for the FC Barcelona since 2003. Currently 30, Messi is the 5 times Ballon d'Or winner and is ready to make his 4th appearance in the FIFA World Cup scheduled in June 2018. Blessed with magical foot, Messi has got hands over lucrative deals and salary, earning him the estimated net worth of $340 million.

Well, along with his deal with FC Barcelona in November 2017, Lionel Messi is considered as the highest paid footballer in 2018. So, how much salary Lionel Messi earns? Scroll down for the information about Lionel Messi's salary, properties, endorsements, and net worth in this section.

Net Worth and Salary of Lionel Messi

Really, Messi has made it to the top of the list of 2018 Highest Paid Footballers as he is earning the annual salary of $56 million currently. While back in 2017, Messi was placed 2nd in the list after his Real Madrid's rival Cristiano Ronaldo.

As of 2017, Messi's net worth was estimated to be around $340 million, however, as of 2018, it is under review. And the jaw-dropping $27 million yearly earnings from Messi's endorsement deals are also eye-catching. Curious to know more? Then let's know details about his career earnings below.

Messi, keenly interested in football, used to play for the Rosario club initially, however, he was diagnosed with growth hormone deficiency at the age of 10.  Impressed by his gameplay, FC Barcelona helped the young future prominent player for the treatment.

Later, Messi was signed to the youth Barcelona team leading his professional contract with Barcelona on February 4, 2004, earning him $1844 weekly wage and making his initial buyout clause at $36.89 million. Then in March that year, Messi's weekly wage increased to $12,296 with his new buyout clause of $98.37 million.

On his 18th birthday on June 24, 2005, Messi got the wonderful birthday present as he was signed to senior Barcelona team on a 5-year deal until 2010, paying him the annual salary of $1.48 million and rising up his buyout clause to $184.45 million. Though soon after, Messi was offered triple increment in his wage by Inter Milan, he decided to stay in Barca.

Soon after Messi made his first hattrick against Real Madrid in March 2007 and he was offered financially improved 5-year deal which paid him $122,000 weekly wage making his annual salary to rise to $5.9 million. In July 2008, Messi became the club's highest paid player after signing a new deal with Barcelona, with the annual salary of $9.59 million.

On September 18, 2009, Messi signed 7-year extension deal with Barcelona, after Barcelona won the Champions League. The new deal earned him the annual salary of $14.76 million, while Messi's buyout clause was reported to be $307.41 million.

Messi, not only got the mouth-watering salary but also was honored with Ballon d'Or and the FIFA World Player of the Year award, both in 2009 following the victory of Barcelona in UEFA Super Cup and FIFA Club World Cup.

Lionel Messi's Salary and Contract till 2018 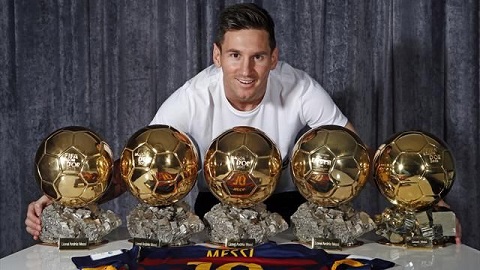 Lionel Messi currently playing alongside the players like Luis Suarez, Jordi Alba, Andre Gomes, Andres Iniesta, got his fourth Golden Boot in November 2017, followed by his new deal with Barcelona on November 25. Previously, Messi won Golden Boots in 2010, 2012 and 2013.

As per Mirror, the new deal due till 2021 season offered Messi, the annual salary of $56.47 million, making him the highest paid footballer in 2018 ahead of his former teammate Neymar Jr. who earns $45.25 million after his move to PSG.

The current value of Messi's buyout clause is reported to be $860 million.

It's not a new thing that the famous celebrities being signed by branded companies for the advertisement of their products.  And the endorsements deals of Messi has played a vital role in the increment of his net worth. So, how much money the global star Messi has made?

Messi's endorsements deal amount can be seen growing along with the passing time, as in 2013, it was reported that Adidas paid him only $2 million while he summed up the total of $21 million from endorsements. The endorsement deal payment in 2014 was $22 million, which increased to $28 million by 2016.

As reported, Messi's deal with Adidas was to expire in 2018, however, in February 2017, he signed a lifetime deal with Adidas, similar to the lifetime agreement penned by basketball star LeBron James with Nike.

However, the detail of the new deal is not disclosed. Also, the Barca star major five-year contract with EA Sports earns him millions featuring him on the cover four times of its worldwide FIFA game.

With the vast incomes from salary, bonuses, and endorsements, Messi has made the extension of his property empire. As reported, the football star owns 2 houses in Spain and one on his home country Argentina.

However, Messi seems interested to keep up his property details quite low. Well, Messi has a house in
Castelldefels, Spain, but the purchase detail or date of the house is not disclosed to date, though some sources claim its price to be around $5 million. 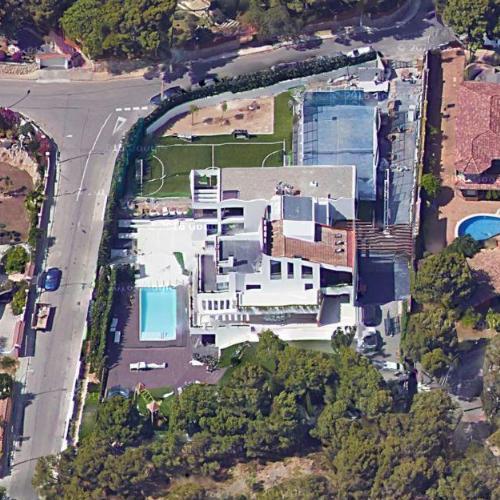 Another house of Messi has even got the highlights for stopping the Barcelona airport extension. The property situated 22 miles outside Barcelona is built on a plot shaped like a football field.

The house was designed by the famous Spanish architect Luis de Garrido,  and is approximately 35km in size and is divided into 2 halves exactly like a football pitch. Have a look at his house from the central main point which spells out Messi's jersey number 10. 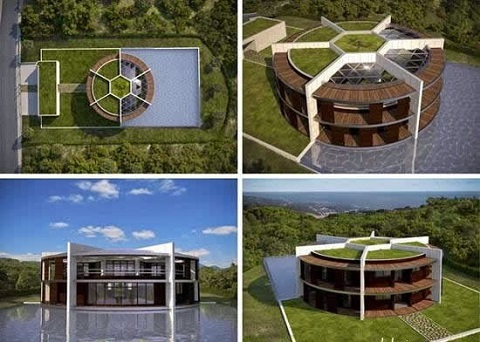 Though the strong information about the house worth is not out yet, it is rumored that the designing cost was around $8.61 million. Messi currently lives in his house with his wife Antonella Roccuzzo, and his 3 sons Thiago, Ciro and Mateo.

Besides, he is reported to have other expensive cars like Rolls Royce, Lamborghini, and many others. Well, the total worth of his cars is around $2 million. 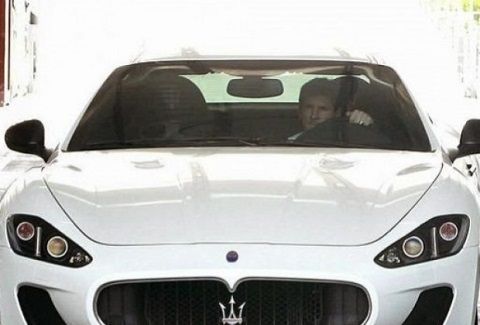 Adding up the surprise, Messi owns a private jet too. Messi's jet Embraer Legacy 650  is worth $34.8 million.

However, it's the second most expensive footballer's jet after Cristiano Ronaldo's Gulfstream G650, which costs $39 million, and one step above of Zlatan Ibrahimovic's Cessna Citation Longitude worth $29.2 million.

Lionel Messi also has got his hands on charity works too. Messi, who was diagnosed with medical difficulties in since his childhood, joined United Nations Children's Fund (UNICEF) in 2004 and is contributing financially and physically since then.

After being appointed as UNICEF's goodwill ambassador in March 2010, Messi also founded his own charitable organization Leo Messi Foundation to help and promote children's health care, education, and sports. 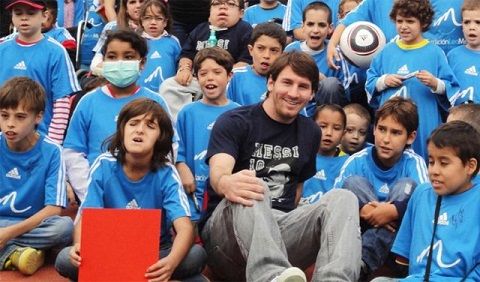 Not only Messi, his efforts made his endorsing company donate in many charitable events for the support of privileged children. On June 7, 2016, Messi got a win over the libel case against La Razón newspaper resulting him the award of $79,927 as compensation which he donated to the charity Doctors without Borders.

Applause to this great footballer, Messi. We wish him best for further and stay tuned for more updates.