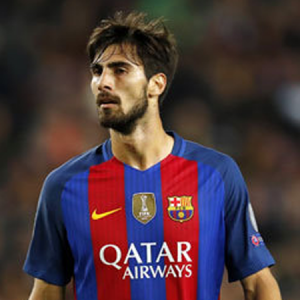 Andre Gomes is a Portuguese professional player who currently plays as a central midfielder for one of the worlds best club Barcelona and the Portugal national team.
The 24 years old professional has played for clubs like Benfica, Valencia, and Barcelona.

He began his youth career with the Academy of Porto in 2005 and later moved to the youth ranks of Benfica.

Andre Gomes began his professional career since 2012, after being promoted to the first squad of the club. His first appearance for the senior team came on 28 July 2012, in a friendly match with Gil Vicente FC. He scored a goal in his competitive debut for the club on 18 October 2012, in a match against S.C. Freamunde. His momentum in Benfica's first team continued on 27 October 2012, as he started and scored in a 3–0 away win over Gil Vicente. His three seasons with the club ended up with a total of 31 games and 10 goals.

Gomes was sent on a season-long loan deal with Valencia CF, on 17 July 2014. His La Liga debut came on 23 August 2014, starting in a 1–1 away draw against Sevilla FC and his first goal for the club came on 22 September, 3–0 away win against Getafe CF. Benfica and Valencia announced they had reached an agreement on Gomes' federative rights and he signed a contract with the Spaniards until 30 June 2020. His two successive seasons with the club ended with a total of 63 appearances and 7 goals.

Gomes further made his move to the league's fellow club Barcelona on 21 July 2016, and made his competitive debut on 17 August 2016, playing the full 90 minutes in a 3–0 home win against Sevilla. He scored his first goal for the team on 19 March 2017, in a match against his former club Valencia. He still plays for the club. He is the good friend of his teammates as Luis Suarez, Messi, and Iniesta.

Andre Gomes has represented his national side Portugal at both junior and senior levels in several tournaments. He made his senior international debut on 7 September 2014, in a 0–1 loss to Albania for the UEFA Euro 2016 qualifiers. He was the part of the Portuguese national team that won the 2016 Euro Cup along with Ronaldo.

Andre Gomes is neither married nor single. Currently, he is in an open relationship with his longtime girlfriend Lisa Goncalves, a dentist at the hospital de Valongo. However, not long ago he was romantically engaged with Marianan Pedro.

Though he has an official Instagram and Twitter, he has not posted any pictures of his partner. Lisa often appears at Camp Nou to support her boyfriend and was also present during the presentation of him.

Central midfielder of FC Barcelona, Andre Gomes is a wealthy man. He owns an unknown fashion in Spain. As of 2017, Andre Gomes has an estimated net worth around $17.79 million. He gets paid $4.3 million as his annual salary from his current club. His weekly wage is believed to be about £80,000.

His current market value is $30.06 million whereas a year back $36.07 million which indicates his decline in his market value. He owns a mansion in Castelldefels. He owns several luxurious cars like Audi.