Caleb Swanigan is an American professional basketball player who plays in the National Basketball Association (NBA). As of 2019, Caleb Swanigan currently plays for the Sacramento Kings as their Power forward. He previously played for Portland Trail Blazers after being drafted in the 2017 NBA draft by the team.

As a  Power forward, Caleb Swanigan reportedly earns around $1,740,000 as his yearly salary from Sacramento Kings. Further, Caleb Swanigan has an estimated net worth of over $1 million.

Caleb Swanigan's Net Worth and Salary

Caleb Swanigan has an estimated net worth of over $1 million as of 2019. Currently signed to Sacramento Kings, his annual salary is reported $1,740,000.

Caleb Swanigan is the son of Roosevelt Barnes and Tanya Swanigan. His father is a retired football linebacker for the Detroit Lions of the National Football League and a current sports agent.

The bird is the word. We taking over. Join the wave. #wordup @rtmccomb for photos

Caleb Swanigan had grown up in an unstable home. His mother Tanya tried to raise 6 kids while his father Carl Sr. struggled with crack-cocaine addiction.

As for his relationship status, He is still single. Caleb Swanigan has no any affairs, wife or kid. It seems as if 21 years old player Caleb Swanigan is busy making his own career.

Caleb Swanigan was born on April 18, in 1997. His father's name is Roosevelt Barnes and mother's name is Tanya Swanigan. As per his nationality, he is American. Further, his star sign is Aries.

Caleb Swanigan attended Homestead in 2015 where he played for his high school basketball team.

He was Swanigan attended a basketball camp led by NBA former coach John Lucas. He used to wear the same number as Barnes, number 44.

On 2015- 2016 Caleb Swanigan had scored 6 points and grabbed 10 rebounds. He scored 27 scores by missing only one. It was also his highest-scoring game against Wisconsin in Purdue's.

The professional career of Caleb Swanigan 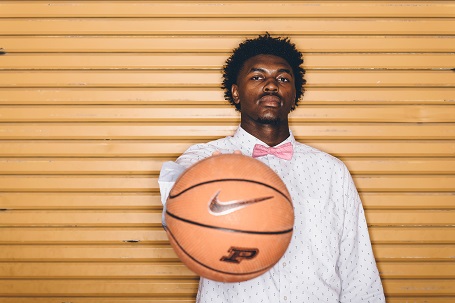 Caleb recorded 16.1 points, 10.6 rebounds, 2.25 assists and 1.4 steals per game during the event including the Summer League Championship game.

On February 7, 2019, he was traded to the Sacramento Kings in exchange for Skal Labissière.

Here are some basic facts on Caleb Swanigan