American Football is a sport where you make or break it. Sometimes in the most literal way. And many fans love to watch their heroes make a touchdown. And with each passing year, new players come into the fold, trying to make a name for themselves. And some achieve to bag fame and glory, while others keep fighting to gain it.

Thousands and millions play the sport; some make it their profession, while others keep it as their hobby. Love for the sport can be comparable to love for a loved one. And through this feeling are ten players who currently hold the title of top players in the NFL. As always, this isn't a ranking of these players but counted as the ten best American Football players of 2022.

Davante Adams started his career in the NFL in 2014. Likewise, the talented athlete has played for Green Bay Packers since they drafted Adams in 2014. However, the Packers and Davante parted ways in late 2021. And currently, the six feet one-inch tall Adams plays as the Wide Receiver for Las Vegas Raiders.

Throughout his career in the NFL, Adams has had a total of 689 receptions. Similarly, his receiving yards record sits at 8,535 yards. And finally, Davante made 78 receiving touchdowns. Aside from his NFL stats, the American footballer won the Paul Warfield Trophy in 2013. And thanks to his fantastic career, Adam currently enjoys an estimated net worth of $25 million.

Josh Allen is a quarterback in the NFL team Buffalo Bills. Allen is a giant as he stands at six feet and five inches. Likewise, Josh weighs in at 108 kilograms or 237lb. And this talented man started his American football journey at a young age. California native started gaining fame in high school and later played for Reedley College and the University of Wyoming football teams. 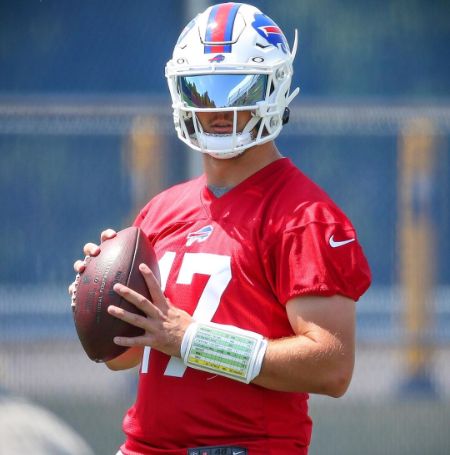 And by 2018, Allen started playing in the big leagues. Likewise, Buffalo Bills drafted the young player in Round: 1, Pick: 7 in the NFL Draft 2018. And at the moment of this article, Josh holds a total of 120 touchdowns. Similarly, the Buffalo quarterback intercepted a total of 50 passes. And as of 2022, Josh owns a roughly estimated $15 million as his net worth.

Tom Brady has become a household name in recent years. Thanks to his long career in the NFL, Tom managed to find his name dropped in popular culture. Not only in sports shows but also in movies and series as well as other forms of media. Brady played the sport since high school, Junipero Serra, to college, the University of Michigan.

In 2000, Tom was picked by New England Patriots in Round: 6 and Pick: 199. Brady also holds a slot in the longest career of an NFL athlete. With over two decades of experience, many fans consider Tom a GOAT(Greatest of all time). His current touchdown number sits at a staggering 632, and his interception score of 204. Earning from salary and endorsements, Tom accumulated a staggering $250 million as his assets.

Aaron Donald is a seasoned NFL athlete with a Super Bowl win. Since the athlete in question is built like a tank, Donald plays as a Defensive Tackle for the Los Angeles Rams. Likewise, the six-foot-one-inch behemoth of a man started playing football in high school at Penn Hills. After this, Aaron joined the University of Pittsburgh in 2010 and played for his college until he graduated in 2013. The following year of his graduation, Donald was picked by the Los Angeles Rams in 2014. And throughout his career, Aaron won multiple NFL Defensive Player of the Year awards in 2017, 2018, and 2020. Even more impressive, the Pittsburgh native won the NFL Defensive Rookie of the Year in 2014. And currently, Donald holds his record of 462 tackles, 102.0 sacks, 24 forced fumbles, seven fumble recoveries, and 16 pass deflections. And since the 2022 NFL season, Aaron has owned approximately $60 million as his net worth!

At 22, Myles Garrett found his big break in the NFL world. Likewise, Garrett joined the Cleveland Browns as their Defensive End. And since then, the NFL star in his mid-20s has played for the said team. And like many others on this list, Myles showed his love for the sport from an early age. Myles played from his high school, Martin. Likewise, after finishing school, he then went on to join and play for Texas A&M University. After finishing college in 2016, though, Myles spent a year away from football. The following year, Garrett was picked by the Cleveland Browns in Round: 1 and Pick: 1. Over the years, the Defensive End of the Browns appeared in three Pro Bowls and two All-Pro. Similarly, Myles holds 217 tackles, 63.5 sacks, 13 forced fumbles, four fumble recoveries, ten pass deflections, and one defensive touchdown. And as of 2022, the 6'4" athlete, Myles, owns $12 million as his expected net worth.

The six feet three inches tall Derrick Henry plays as the Runner Back for Tennessee Titans. Likewise, coming in at 112 kgs or 247 lb, Derrick started playing American football in Florida. Similarly, the talented NFL star began playing the sport at Yulee High School. And after high school graduation, Henry moved to Alabama and joined the University of Alabama football team.

The Tennessee Titans picked Derrick in the 2016 NFL draft. The Titans chose Henry in the second round and the 45th pick. And over the years, the Titans runner-back was included in two Pro Bowls and one First-Team All-Pro. And in 2020, Derrick gained the NFL Offensive Player of the Year title. As of week five of the 2022 NFL season, Henry managed to gain 7,205 rushing yards. Similarly, the runner-back holds a 4.8 rushing average, 70 rushing touchdowns, 104 receptions, 967 receiving yards, and three receiving touchdowns. Likewise, as of 2022, Derrick owns a roughly calculated $3 million as his net worth.

The Douglas, Georgia, native Tyreek Hill plays as the Wide receiver in the NFL team Miami Dolphins. Likewise, the 5'10" Hill started playing football at Coffee High School in Georgia. And Tyreek later transferred to three universities and played for their respective football team. At first, the talented young athlete played for the Golden City Community College in Kansas in 2012. And after that, Hill joined Oklahoma State University in 2014. Finally, in his final year, the Wide receiver joined the University of West Alabama in 2015. 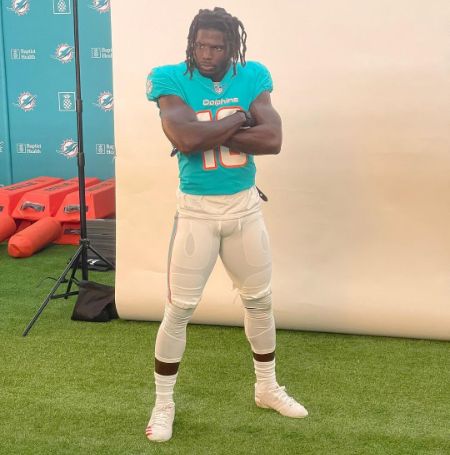 After Tyreek graduated from college, Kansas City Chiefs signed up under their banners. Likewise, Hill played for the Chiefs from the starting season of 2016 up to 2021. And from the start of the 2022's NFL season, Miami Dolphins bagged the talented player. In his career, Tyreek became part of the Super Bowl champion in 2019! Similarly, Hill even became included in 6 Pro Bowls. With many accomplishments in the NFL world, Tyreek from the Miami Dolphins owns an estimated $40 million as his net worth.

Jerald Christopher or J.C. Jackson plays for the Los Angeles Chargers. And the talented athlete holds the Cornerback petition in the Chargers. Born in Immokalee, Florida, Jackson started playing football at Immokalee High School. And after he graduated from school, J.C. joined two colleges to further his football career. First, he played for the University of Florida and later transferred to the University of Maryland.

In 2018, New England Patriots took in Jackson with a lucrative three-year deal. And after playing for a year more than the initial contract, J.C. joined the LA Chargers. Likewise, the Chargers paid the athlete $82.5 million for a five-year deal. And in recent years, the Cornerback became a Super Bowl champion and was included in Pro Bowl 2021. As of 2022, Jackson owned an estimated net worth of $30 million.

Justin Jefferson, the Louisiana-born NFL athlete, started his football journey during high school. And currently, Justin Joshua Jefferson plays as the Wide receiver for Minnesota Vikings. Jefferson is one the youngest player to be considered the best in NFL. And he started his football career in the National Football League in 2020. Likewise, he played for his hometown school's football team. After graduating, Justin attended Louisiana State University and played on their team.

In the 2020 NFL Draft, the Vikings picked Jefferson in the 22nd pick of the first round. And currently, the NFL star holds a record of 236 receptions, 3,563 receiving yards, and 19 receiving touchdowns. One can say that Justin is one of the best American footballers of his era. On the same note, Justine owns an estimated net worth of $7 million in 2022.

Born and raised in Westlake, Ohio, Travis Kelce plays in the petition of Tight end for the Kansas City Chiefs. And like all of the players included on this list, Travis started his football journey in high school. Similarly, this talented athlete played for his hometown, Cleveland Heights High School. After finishing school in the late 2000s, Travis joined the University of Cincinnati. 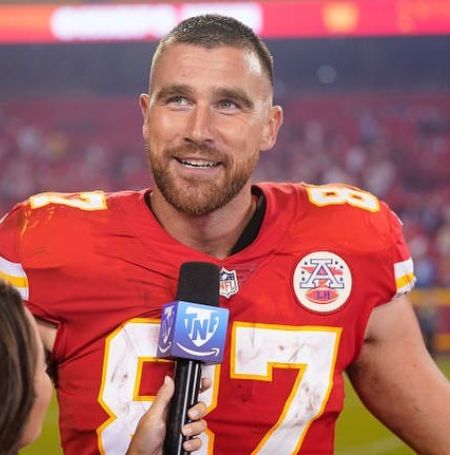 After graduating from college in 2012, the Chiefs picked Kelce in the 2013 NFL Draft. Again, the Kansas City team picked Travis in the third round and the 63rd pick. Throughout his career, the Ohio native NFL star became a Super Bowl champ, included in seven Pro Bowls, and more! Speaking of Kelce's career, his stats currently sits with 737 receptions, 9,353 receiving yards, and 64 receiving touchdowns! Besides, the talented athlete Travis from Kansas City Chiefs owns an assumed net worth of $20 million as of 2022.