Belgian professional football player, Mousa Dembele currently plays for “Belgium national team” and “Tottenham Hotspur” as a central midfielder. He started his professional career with Germinal Beerschot in 2004 and has also played for Willem II, AZ, and Fulham.

Mousa Dembele currently earns an annual salary of £4.1 million a year and has an estimated net worth of £8 million in 2021. He is currently dating his girlfriend Naomi Solange and has two children with her.

Mousa Dembele was born on July 16, 1987, as Moussa Sidi Yaya Dembele in Wilrijk, Belgium. He was born to his father, Yaya, and mother, Tilly Huygens, a Campanian artist, and grew up with his sibling Assita.

His father is Malian while his mother is of Flemish ethnicity. Regarding his nationality, Dembele holds both Belgian and Malian and belongs to Afro-American ethnicity.

Dembele began his football career joining "K. Berchem Sports". He spent one year in a youth team of "Germinal Beerschot" from 2003-2004. After being promoted from the Germinal Beerschot youth club, Dembele started playing in a senior team in 2002. He made his professional debut with the club against Charleroi on April 24, 2004. He has scored 1 goal in 20 appearances before ending his career.

On August 18, 2010, Dembele signed a three-year contract with Fulham with the fee of £5.40 million and his first match came against Manchester United on August 22, 2010. He spent three seasons with the club where he scored 5 goals in 62 matches.

Dembele then joined "Tottenham Hotspur" on August 29, 2012, with a transfer fee of £17.10million. He scored his first goal in his debut match against Norwich City on September 1 which ended in a 1-1 draw, an assist from Dele Alli. Later, he suffered a recurring injury in his foot in the 2016-17 season. Again, he injured his ankle in the "EFL Cup" against Barnsley in September. So far, he has scored 7 goals in 159 appearances.

Dembele began his international career with the Belgium U-16 team in 2002. He played 3 games for U-16, 6 for U-17, 1 for U-18 and 3 for U-19.  Dembele represented Belgium internationally, earning his first cap with the senior team on May 20, 2006, against Slovakia replacing Luigi Pieroni. His first international goal came against Azerbaijan. To this date, he has earned 70 caps and scored 5 international goals.

Who is Mousa Dembele's Girlfriend?

Dembele's star sign is Cancer. He is in a relationship with his girlfriend, Naomi Solange since 2012. The couple is blessed with two children Malbec and Fellah Dembele. The couple often posts pictures of their summer vacation. 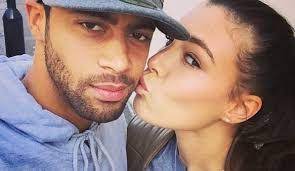 Naomi is a model, however, she quit her profession to be with Dembele.

His girlfriend is a student of Gerrit van der Veen College. The pair was first introduced to each other at the stadium. He is Muslim by religion. His favorite footballer is Maradona.

Mousa Dembele Net Worth and Salary

He receives a satisfying amount of money from his product endorsement “HP & FoxPro”. He has a car collection that includes Range Rover, BMW, Audi Q8, and Mercedes.

Dembele is planning to open a hotel, De Gulde Schoen - The Golden Shoe - in his birthplace Antwerp. He found a treasure worth $1 million while checking the hotels' cellar. He also had deal with various companies including Adidas.