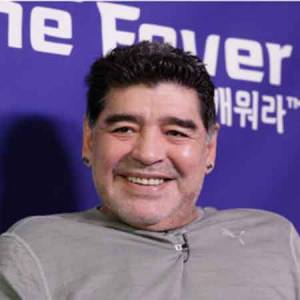 He has also played for several clubs such as Barcelona, Napoli, Sevilla, Boca Juniors, etc. to name a few.

Considered as the greatest player alongside Pele in the 20th century, he was instrumental in handing Argentina the 1986 FIFA World Cup trophy.

He currently serves as the chairman for Belarusian football club, Dynamo Best.

According to the Richest, his net worth in 2018 is around $100,000, which he is also an outcome of his managerial career.

He was ordered by Italian tax department to compensate more than $50 million as a tax.

Maradona has a house in Argentina that was estimated to cost around $2 million and has a fine collection of cars like Porsche which has a market price of $30,000.

He made his club debut with the Argentinian football club, Argentinos Juniors on 20 October 1976 and scored his first goal against San Lorenzo on 14 November 1976 and later joined the fellow Argentinan club, Boca Junior in 1981.

Maradona made his debut for Boca Junior and scored his first Boca junior goal against Talleres de Cordoba on 22 February 1981.

He later moved to Spain and signed with Barcelona for then record transfer fee of around $ 7.6 million.

Maradona was the part of the successful Barcelona team that went on to win the Copa de  La Liga in 1983.

After a successful spell with Barcelona, he was transferred to Italian Serie A club Napoli for a transfer fee of $ 10.48 million in the summer of 1984.

After being caught with cocaine, he served one and a half year ban from Napoli; he left the club in 1992 and signed with the Spanish club named Sevilla FC. Later, he played with the Argentian club named Newell’s Old Boys and returned back to Boca Juniors in 1995.

The highlight of the tournament came in the quarterfinal rounds against England when Argentina beat England, all thanks to Maradonna.

His first goal was a controversial one as it was considered a hand of  God. His second goal was voted the greatest goal in FIFA World Cup history.

He also went on to win the Golden Ball as the best player in the tournament.

Maradona retired from international football in 1994. He has made 91 appearances and scored 34 goals for Argentina.

He is a Roman Catholic and was married to his longtime girlfriend Claudia Villafane, in Buenos Aires, on 7 November 1984.

The pair, however, divorced in 2004. Likewise, he is also claimed to have had a son, Diego Sinagra ( born on 1986), with an Italian woman named Cristina Sinagra.

Talking about in the present, there are reports that he is dating his girlfriend Rocio Oliva.

He has also been noted for cocaine addiction throughout his career, and post his retirement as well.  His addiction started in 1983.

It was later reported that he refrained from drinking and drug addiction in 2007 and has been sober ever since.