Mikel Landa Meana a.k.a. Mikel Landa us a professional Spanish road cyclist who competes for UCI WorldTeam Bahrain–McLaren. His major win came at the 2015 Giro d'Italia where he won two stages and finished third overall.

A professional since 2009, Mikel Landa has earned enormous sum through his career. As of 2020, his net worth is approximately $1 million.

Currently, Landa rides for UCI WorldTeam Bahrain–McLaren where his base salary is reported $0.5 million per annum. Further, the cyclist summons a decent sum from endorsement and prize money. 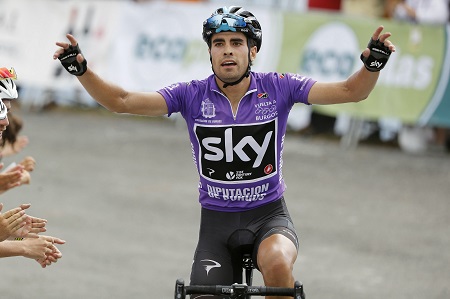 Egan Bernal, Geraint Thomas, and Tom Dumoulin are the highest-paid cyclist in 2020.

Mikel Landa is neither married nor in a relationship. The thirty-years-old cyclist is possibly single as the hunk has not shared even a word regarding his relationship/girlfriend.

However back in October 2016, he shared a picture with a lady captioning, "See you next year!" Besides, he has not shared any pictures with a lady.

Mikel Landa was born to Conchi Meana and Pablo Landa. He grew up in a small village Muggia riding a bike because it was the just best way to get around he said.

When he turned 13, he joined the cycling club, Ciclista Zuyano and decided to start racing. His first was a mountain bike but after a year in a being club, he wanted a better road bike. After some time his parents got him an Orbea Mitis after seeing how serious was Landa about cycling.