Matteo Berrettini is a rising Italian Tennis player. He turned professional in 2015 after playing at the amateur level for more than five years. Matteo is learning from some of the best Italian players like Vincenzo Santopadre, Marco Gulisano, and Umberto Rianna. He has won three singles titles and two Doubles in his short professional career.

Matteo Berrettini was born on April 12, 1996, in Rome, Italy. He is among the two children born to Luca Berrettini and his wife, Claudia Bigo. They sometimes come to see their son at tournaments, as they were seen in his box at the US Open in 2019. He has a younger brother Jacopo Berrettini who is also a professional tennis player. Matteo stands six feet and five inches tall and weighs 95 kgs.

Matteo Berrettini has an estimated net worth of more than $5 Million. He has already made huge money through his professional career as his Tennis career earnings through Prize Money Singles & Doubles Combined is reported to be $5,431,649. Last season, Matteo took home $87,000 only as several events canceled due to the COVID Pandemic. 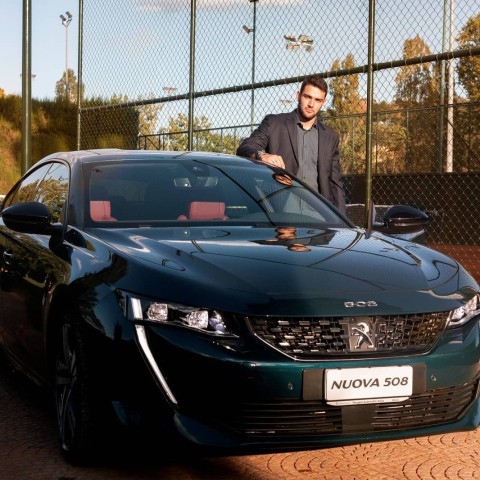 Matteo shares a photo with his car SOURCE: [email protected]

Within two months of 2021, Berrettini has already earned $338,542 from ATP Tour. He is very much early in his career and shall be making much more in the days to come. Matteo has sponsorship deals with Colavita and has been with it since 2019.

The Italian Tennis player Matteo is dating  Australian tennis player Ajla Tomljanovic. The love birds have been dating each other for more than two years. As both come from a similar background and share common ground, they are very supportive of each other. They are yet to get engaged and tie their wedding knot.

The couple is very much early in their career and shall be exchanging their wedding vows soon. The two players are regularly seen supporting their partners at each others' matches.

Matyto's girlfriend Ajla formerly dated fellow Aussie and tennis player Nick Kyrgios. The couple was in a relationship for two years but broke up in 2015. Tomljanovic and Kyrgios were often spotted together when they had downtime during their relationship.

Matteo turned professional in 2015 but could not make it to the top. He came into the limelight in 2017 after he made his ATP main draw debut at the Italian Open. He had entered the game through a wildcard. In 2018, the tennis player caught the media's attention after winning his first ATP title at the Swiss Open Gstaad defeating Roberto Bautista Agut. In the same season, Berrettini won his first ATP doubles with Daniele Bracciali.

In the 2019 season, the Italian tennis player won his second ATP singles title at the Hungarian Open. In the Italian Open, he won against Alexander Zverev. At the beginning of the 2019 season, Matteo reached the semifinals of the Halle Open and broke into the world's top 20. He also reached the second week of Wimbledon for the first time but lost to Roger Federer. By the end of the season, Berrettini reached the world number 8.

The 2020 season did not go well for Matteo as he lost in the middle of the events. However, he finished the season ranking in the top 10. In early 2021, Matteo had an excellent start to the Australian Open, had an injury.