Harriet Dart is a rising British tennis player. She is currently playing in the professional league since 2018. Harriet won four singles and 14 doubles titles on the ITF Circuit. She made her WTA Tour debut at the 2015 Aegon International.

Harriet Dart was born on July 28, 1996, in Hampstead, London. She is among the two children born to Susie Dart and her husband, Nick Dart. Her mother is a teacher, and her father is a surveyor. She has a younger sister named Pheobe Dart. Harriet stands five feet and eight inches tall and weighs 59 kg.

Harriet has an estimated net worth of more than $500,000. She has accumulated most of her net worth through her successful career as a tennis player. Dart is very much early in her career and shall be making millions in the future. Harriet must be receiving a handsome amount through her sponsors and advertising deals. A tennis player earns as per the round they reach in an event.

Harriet has already earned more than $70,000 from seven events. She had earned the most from Roland Garris when she reached Round three of the Qualifiers. In February 2020, The English tennis player took home $88,680  when she reached the R64 in the Australian Open. Totaling her career earnings from tennis, it sums to $771,229.

Who is Harriet Dart Dating? Know About Her  Relationship Status and Boyfriend

The English professional tennis player is very much private about her relationship status. However, She is an active social media user. Harriet has not shared a word about her boyfriend and her love life in public.

As per sources, Dart is involved in a romantic relationship with her boyfriend. In an interview, she opened about dating a boyfriend for more than a year. Harriet has not uttered a single word since then and must be waiting for the right time to open about her relationship status.

Harriet started playing tennis at the age of seven. She did not come from an athletic family background but quickly adapted to the environment. Dart started her career playing in the Hard/Glass court.

Harriet made her ITF debut in 2012 and lost the first match against Renata Voracova. To date, She has won four ITF titles in singles and fourteen titles in Doubles. The English tennis player started her professional career in 2018 and made her debut with the ITF. She won her first ITF title in an event in Germany. 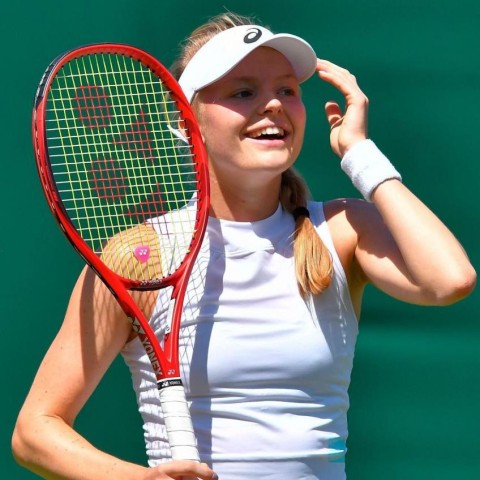 Harriet shares a laugh after missing a shot in the game SOURCE: Tennis World USA.

In 2019, Harriet qualified for the Australian Open but lost her first match against Maria Sharapova in the first round. In March, Dart and her doubles partner Lesley Kerkhove won the final of the Open de Seine-et-Marne.

The same year, she made it into the third round at the Wimbledon Championships but lost to Ashleigh Barty. Harriet was part of the Fed Cup and won two matches held in 2019.