Mariah Linney is an American basketball player who plays for UNC's Charlotte 49ers. Besides, she is a senior-level player who plays as a guard and wears jersey number three for her club. Mariage has been emerging in the basketball field since high school, and with her successful playing career, she is also regarded as one of the most valuable players on the squad.

Further, Linney was born on 6 February 1999 in Goose Creek, South Carolina, United States. Besides, she is a native of Goose Creek, where Mariah spent most of her early career. And her father's name is OJ Linney meanwhile her mother is Amanda Short. The sportsperson also has a younger brother.

How Much Is Linney's Career Earning? Her Salary and Contract Deal

The professional basketball player Linney is among the promising player in her squad, and she has been active in the field since high school. Like, DJ Rodman, she also hasn't made her professional career debut, so the details of her salary and earnings remain undisclosed. Likewise, Mariah also has a strong presence on social media platforms where we can see. She is a career-focused athlete. Thus, she will add massive money to her bank account. Similarly, she follows a lavish lifestyle, and Mariah often shares pictures showing her Nike shoes and clothes.

Linney is among the tall basketball player, including Rhyne Howard. Besides, she is 5 feet 6 inches tall. For more updates, we can follow her on Instagram under the username @mofiyah99, where more than 390k people follow her.

The fan's favorite player, Linney, gained much limelight for sharing pictures with Outer Banks' actress Maddison Bailey. Fans spotted the two stars together and began to speculate that they were in a romantic relationship.

Well, the speculation came true as the basketball star, Linney, has shared multiple photos with Maddison where they seem to have a great bond. The pair has a great connection and continuously shares their pictures online with their fans. 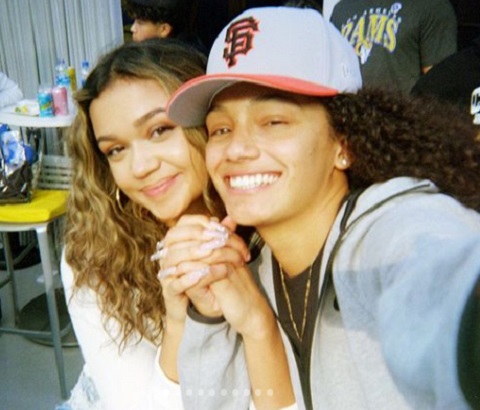 Maddison is famous as Maddie Baby on Instagram and is a talented actress featured in more than fifteen Tv series.

Linney Mariah's sexual orientation is not straight. Moreover, she is one of the proud members of the LGBTQ community. Additionally, her pronouns are she and her.

Mariah Has A Huge Fan Following On Tiktok

Before gaining fame as a basketball player, Linney launched her TikTok account in October 2019. She has gained 1.1 million followers on the platform, and her first video has over 1 million views.