James Bouknight is a four-star recruit American college player ranked the 53 best players by 247Sports in the 2019 class. He is currently playing in the Big East Conference league for  UConn Huskies and previously played for La Salle Academy and MacDuffie School.

James Bouknight was born in Brooklyn, New York, on September 18, 2000. He is the youngest son of John Bouknight and Patty Leo and has an older brother and one older sister. He holds American nationality with Christianity as his religion. He stands 6 feet 5 inches tall with a weight of 190lb (86kg).

James started playing basketball in middle school as he spent most of his childhood playing baseball. He started his high school career at La Salle Academy in Manhattan, New York. He was named the MVP for leading his team to the New York Federation Class B state championship with an average of 17.4 points per game. 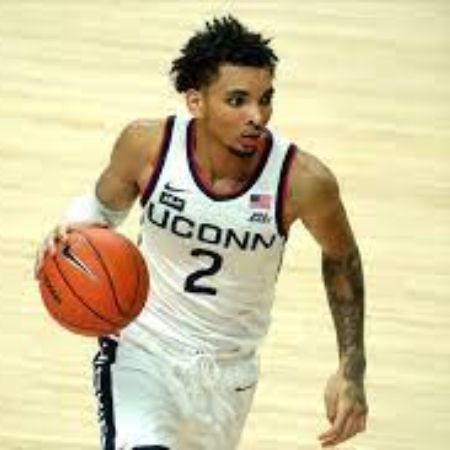 Likely, he was able to earn Catholic High School Athletic Association B Division MVP and New York State Sportswriters Association Class B Player of the Year accolades. Later, he transferred to MacDuffie School in Granby, Massachusetts, and there he reclassified his junior session by averaging 19.3 points, five rebounds, and two assists per game.

Later, he devoted himself to playing college basketball for UConn before his senior session on September 18, 2018. On November 7, 2019, he was charged for driving too fast without a license and interfering with the police officer and was suspended for three games. He earned Third Team All-AAC and All-Freshman Team selection during his freshman season.

Starting his sophomore season, he was named the preseason John R.Wooden Award watch list. He scored a career-high 40 points in a 76-74 overtime loss to ninth-ranked Creighton on December 20, 2020. Dan Hurley is coaching him.

Being an athlete, you can't know what might happen to you while playing or before the game. Similarly, an unfortunate tragedy occurred to Bouknight in 2021 while playing in the first half at Marquette.

He got the injury when he collapsed with Koby McEwen, and Koby fell on James's arm. He had his arm braced and practiced his skill using only one arm. The doctor consulted him to perform a surgery, further detail about the surgery is still not revealed.

James Bouknight Source of Income and Net worth

After scoring 18.7 points per game this season and guiding the Huskies to their first NCAA Tournament appearance since 2016, UConn star guard James Bouknight has declared for the 2021 NBA Draft. As it is well known, college athletes are not paid as for the NCCA rules, James does not get paid, but he has got a different scholarship from which he can pay his school and other bills.

The star college athlete will definitely make good earnings if he makes it into the NBA at the NBA Draft 2021.

Bouknight is still single at the age of 20, and no further information is given. He is still young and is putting in long hours to develop his career. So he spends most of his time training rather than doing other kinds of stuff.