Cleveland, Ohio native, Naz Hillmon was born on 5th April 2000, under the star sign Aries. The twenty years old holds an American nationality and is from an Afro-American ethnic background. Regarding her physique, she stands 6-1 tall and weighs 190 pounds.

The answer is NO! College athletes do not get a salary for playing the college team. rather, they get a full ride to college they play for (not all). To get a free education is a huge incentive to play ball. The best kids out of college get drafted and get a signing bonus. The average WNBA player makes $100,658 per annum.

Since Naz is yet to turn professional, she does not earn a penny for playing in the college team. Her net worth as of 2021 is under review.

As per reports, Naz Hillmon's relationship status is single. There is no data in the media proving Hillmon being in a relationship. Additionally, her IG does not feature any lovevy dobby pictures of her. Seems like the 6'1" tall is much focused on her career rather than anything else. About her study, she is majoring in communications.

Pretty famous on social, she has over 8k followers on her IG whereas 1,838 Followers on Twitter as of January 2021.

From A Basketball Family

Born as one of five children to Victor and NaSheema Anderson. She was raised alongside her brothers, Zahkir Hillmon and Zaharius Hillmon, and two sisters, ZaTasja Baker and Jayda Anderson.

Her mother, Mother NaSheema Anderson played basketball at Vanderbilt and for the ABL Nashville Noise and was 1994 Gatorade Ohio State Player of the Year and Miss Ohio Basketball. Similarly, uncle, Jawad Williams, played for the University of North Carolina, winning an NCAA title and professionally for the Cleveland Cavaliers, in Turkey, and in Tokyo. Her aunt Siedah Williams finished her collegiate career at the University of Virginia. The family owns a combined eight Ohio high school state championships 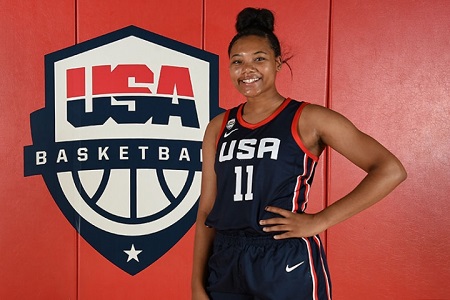 The following year, as a member of the USA U19 World Cup Team that finished with a 7-0 record and won the gold medal with a 74-70 overtime win against Australia in Bangkok, Thailand: started all seven games and averaged 7.4 ppg. and a team-high 7.6 RPG.