Short Hills, New Jersey native Noah Farrakhan was born on December 3, 2000, under the star sign Sagittarius. The twenty-year-old holds an American nationality and is of African ethnic background. He is the son of Theo Oliver and Miriam B.

The answer is NO. The NCAA can get away with not paying its student-athletes due to the distinction made in sports law between amateurs and professionals. Student-athletes are the former. The NCAA redistributes the revenue it generates to all the schools under its oversight and the different sports they run. Rather, the athlete gets a scholarship.

The personal goal of every player is to get a draft into the NBA. Farrakhan's current NBA status shows his draft-eligible in 2024. The average NBA player's salary is $7.7 million for the season.

Noah enrolled at St. Benedicts Prep (Newark, N.J.), where he played basketball during his first- and second-year student seasons. He earned second-team all-state honors as a sophomore. Farrakhan was a member of St. Benedict's 2017 and 2018 NJISAA state championship teams. Later, he transferred to IMG Academy, where he helped to capture the 2019 GEICO High School national championship.

He attended The Patrick School in New Jersey for senior year, where he played as a senior in 2019-20, leading the team to a sectional championship. He averaged 7.1 points and 2.4 assists per game during his final prep campaign while shooting 46 percent from the field and 34 percent from deep (13-for-38).

In his first year, Farrakhan played twelve games with an average time of ten minutes per game. He scored just 3 points a game. In sophomore year, Noah played in twenty-six games and averaged 16.6 points per game and has excelled in his game since then.

Noah Farrakhan is quite famous on Instagram, with 324.7k followers in May 2022. However, he is not that active with posts. There are hardly five pictures. Noah is a low-key person who has disclosed less to no information regarding his love affair or girlfriend to the public. 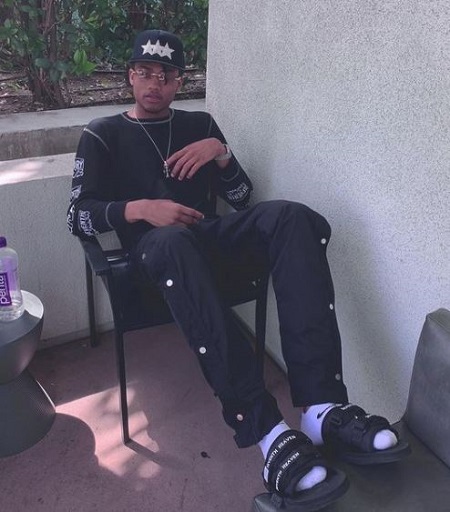 The hunk's love life is private and is currently focused on his basketball career. There is no rumor of the player dating anyone in public. For now, Noah is possibly single.