2019 Jordan Brand Classic, Jaden Mcdaniels is an American college basketball player for the Washington Huskies of the Pac-12 Conference. Following the freshman season, he declared for the 2020 NBA Draft, forgoing the final three years of his college eligibility.

How Much will Mcdaniels Earn, If He Goes Selected In 2020 NBA Draft?

Jaden McDaniels is ranked possible 30th pick 2020 NBA Draft Prospect Rankings behind Theo Maledon, Tyrell Terry, and Kira Lewis Jr.. Good size and length for a position with a 6’11.5 wingspan and 8’11 standing reach, McDaniels averaged 13 points and 5.8 rebounds per game before declaring for the 2020 NBA draft. 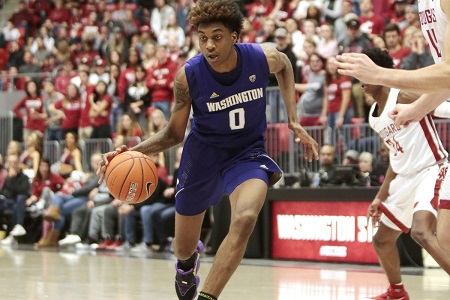 Jaden is preparing for the 2020 NBA Draft SOURCE: Brew Hoop

The 30th pick in the first round of the 2020 NBA draftee is projected to have the following salaries:

If Jaden goes as per speculation in the upcoming NBA draft, the hunk will be a millionaire soon. A matter of fact, as he is yet to become a profession, he has not earned a penny from basketball.

Being close to one of his biggest dream, Jaden is surely focused on his basketball career. Instead of the gossip of his love life, nowadays the media is full of his 2020 NBA prospects news. May be upcoming draft is the reason for his low key personal life.

Without any concrete proof regarding his love life such as dating or girlfriend, one can not confirm. Hence, he is possibly single.

Jaden McDaniels was born to parents: Will McDaniels and Angela Jackson, both are originally from Chicago. When it comes to being recruited, the father figure prefers to keep it that way. Will McDaniels said "Right now is not the time just for you to be your son's dad. It's also time for you to be his bodyguard."

Besides, Jaden is not a family member who is into sports. His brother, Jalen McDaniels, played basketball for Federal Way High School, the same high school Jaden played for. Furthermore, Jalen joined San Diego State at the college level and was selected by the Charlotte Hornets in the second round of the 2019 NBA draft.

Now regarding Jaden's: upon graduation, McDaniels committed to play college basketball for Washington on 22nd 2019.