Marcy Laca is better known as the wife of an American college basketball coach Mark Few who has been the head coach at Gonzaga University.

Marcy Laca was born in the 1960s. Marcy is yet to share a word about her early life and her parents in the media. Laca holds American nationality and is of Basque descent. Laca enrolled at Gongaza University and completed her bachelor's degree.

Marcy and Mark first met each other in 1990 at the university while she used to work at the front desk at the school’s athletic facility. It did not take long for the friendship to turn into a relationship. The love birds started dating each other and tied their wedding knot in 1994 in a lavish and private wedding ceremony. 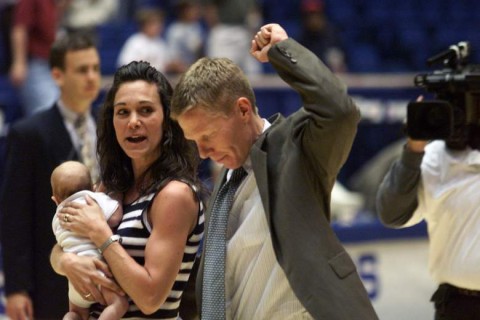 Marcy with her child and husband, Mark, at a game SOURCE: Getty Images

Laca's father-in-law, Norm Few, was the officiant for the couple's wedding ceremony. It took the couple more than six years after their marriage to welcome a new member into the family as both of them were at the very beginning of their career and did not want to hamper their career. In 2000, Marcy and Mark welcomed their first child, Austin James. Following Austin's birth, in 2002, the duo was blessed with another son, Joseph Dillon.

In 2006, Marcy and Mark welcomed their first daughter, Julia Ann Elizabeth, and three years later, their family grew with the birth of their third son, Colt Walker. Mark is very much supportive of his children. His daughter and three sons often attend practices, travel with the team, and can be seen handing out towels and water bottles to players on the bench.

Marcy Laca's Net Worth and Earnings

Marcy currently spends most of her time at home looking after their children. She is actively involved in charity. Marcy and Mark have been organizing charity golf tournaments under the Coaches vs. Cancer umbrella since 2002. They have successfully raised $6.7 Million. Like other Wags, Leslie Hurley, and Oga Emelianenko,  Laca is also living a lavish life through her husband's successful career. 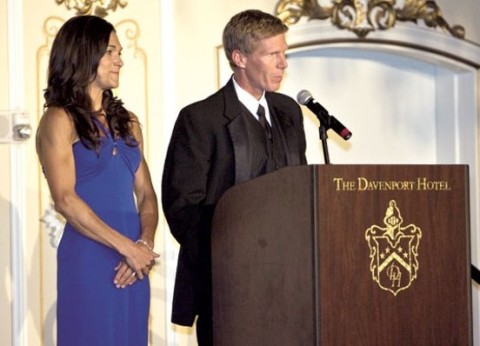 Marcy and Mark delivering a note in an event SOURCE: Inlander

Marcy's husband, Mark Few has an estimated net worth of more than $15 Million. He has been working as the head coach of Gonzaga Bulldogs since 1999 and is among the highest-earning and longest-serving head coaches in the NCAA. He has an annual salary of $1,979,059. Few led Gonzaga to 15 consecutive NCAA tournaments.

Mark is among the top-ranked head coaches. However, His salary is not matched to his performance. Mark does not like to be away from his family and has rejected numerous top-ranked university offers.