Mark Few is a well-established American college basketball coach. Mark has been working as the head coach for Gonzaga University's men's basketball team since 1999. Mark has served on the coaching staff with the team since 1989. He has won thirteen WCC Coach of the Year.

Mark Few was born Mark Norman Few on December 27, 1962, in Creswell, Oregon. Mark seems to be the only child born to Norm Few and his wife. His father was a Presbyterian pastor. Nothing much about his mother is shared with the media. After graduating from Creswell High School, Mark enrolled at the University of Oregon.

Mark Few has an estimated net worth of more than $15 Million. He credits most of his net worth to his successful career with the American college basketball association. Mark must be earning millions as he is among the longest-serving coaches in the league. In addition to his salary, Few must be accumulating a huge sum through his bonuses and contracts. 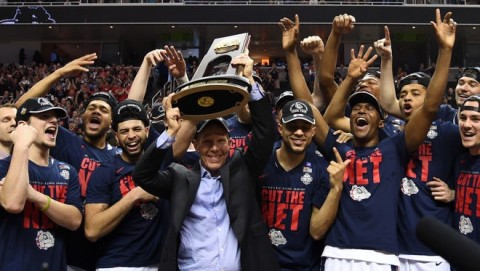 Mark with his team and the Trophy SOURCE: USA Today

As per the sources, Mark ranked 24th among the coach's earnings in 2019/20. He earned $3.3 Million as his salary and bonus money from Gonzaga. In 2016, When his team made it to the Sweet 16, Few was the third-lowest paid coach in the league, earning merely  $1.37 Million. Brad Stevens is a famous NBA coach with a net worth of more than $10 MIllion.

Mark Few lives a happy married life, along with his wife and his children. Mark is married to his longtime girlfriend, Marcy Laca. The love birds walked down the wedding aisle in 1994. They had a private and beautiful wedding ceremony where only a few members from both the families and some close friends attended the ceremony. His father, Norm, was the pastor of their memorable day. 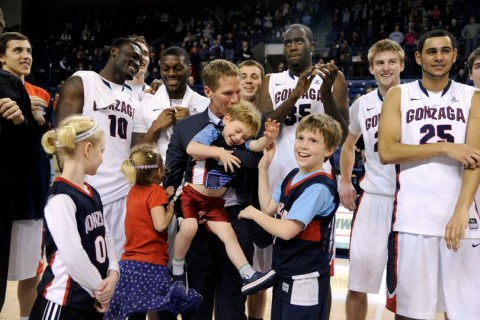 Mark with his children SOURCE: Spokesman

The duo has welcomed four children, three daughters and a son, from this happy marriage. AJ, Joseph, Julia, and Colt. As Mark remained away for his work, Marcy remained at the house looking after their children. Mark seems to be very much supportive of his children. They can be seen attending his matches frequently.

Mark had an impressive start to his career. He led them into the NCAA Sweet Sixteen each of the first two years. He was named Coach of the Year for WCC from 2001 until 2006. In 2015, Few became the head coach of the United States National Team at the 2015 Pan American Games.